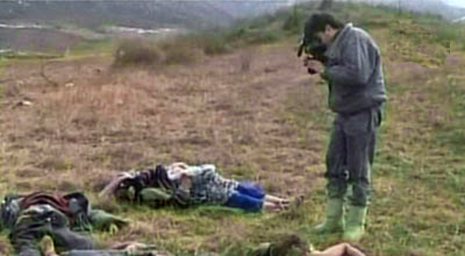 On February 20, 1988 the Armenians in the Nagorno-Karabakh Autonomous province, integral part of Azerbaijan, living with the status of an autonomous oblast within the Azerbaijan SSR adopted a decision on cessation from Azerbaijan SSR and joining to Armenian SSR. In 1991 Armenians of Nagorno-Karabakh had arranged a fraudulent referendum, and declared their "independence". Notorious well-known economist, academician A. Aganbekian and Armenians from France played the role of the primary instigator in it.

2 days after the decision of Council of People`s Deputies of Nagorno-Karabakh Autonomous Oblast on cessation from the Azerbaijan Soviet Socialist Republic and join the Armenian SSR in Askeran region Aghdam and Askeran region residents held a peaceful demonstration. Armenians killed 2 young people by opening fire (Ali Hajiyev and Bakhtiyar Guliyev). The fact of first blood in Karabakh conflict, killing of two young people was confirmed at the TV speech by F. Katushev, then the First Deputy of the USSR`s Prosecutor.

Reliable sources of two youths being as the first victims of the war between Armenian and Azerbaijani communities, and that the first murder was committed by Armenians, are many. Chairman of the kolkhoz, Hero of Socialist Labor Khuraman Abbasova could prevent young people marched from Aghdam Khankendi to take revenge of two killed young people, armed with stones and wood, with dropping scarf. The first blood shed on February 22 in the Nagorno-Karabakh, by the Armenians of Askeran, was a beginning of next trick of Armenians after 4 days in Sumgayit. Thus, the Armenians held a pre-planned provocation. A few Sumgayit Armenians were killed by the Armenians, sent to from Armenia especially and this fact was presented to the world as killing of Armenians.