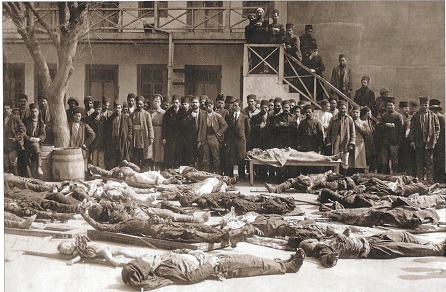 Stepan Shaumyan’s name is associated with one of the most tragic periods in the history of the Azerbaijani people in the 20th century. Acting under the banner of the Bolshevik regime, Shaumyan in fact embodied the programme of the Dashnaktsutyun party, whose strategic goal was to create an Armenian state on a considerable expanse of Azerbaijani and Turkish territory. It was possible to achieve this goal only by means of exterminating the Azerbaijani and Turkish population, and the Armenian leaders did not fail to use those means.

Shaumyan finally took the path of Armenian expansionism after the Bolshevik government of Russia announced its decree on 11 January 1918, supporting “the right of Russian-occupied Turkish Armenia to free self-determination as far as independence”. Shamyan’s affiliation to two parties explains how he used armed Dashnak detachments in March and April 1918 to organize the mass extermination of the Azerbaijani population.

Shaumyan subsequently admitted: “We used the occasion… and launched an offensive along the entire front…, and we had armed forces – about 6,000 people. Dashnaktsutyun also had from 3,000 to 4,000 national forces that were at our disposal. The latter’s involvement partly gave the civil war the nature of an ethnic massacre, but there was no way to avoid this. We did this consciously. If they (i.e. Azerbaijani political forces) had gained the upper hand in Baku, the city would have been declared the capital of Azerbaijan.”1

As a result, in three days – from 30 March to 1 April 1918 – the Bolshevik-Dashnak troops exterminated more than 12,000 Azerbaijanis in Baku because of their ethnicity. After this, how can we not regard Shaumyan as the principal organizer of a massacre of Azerbaijanis?

From Ramiz Mehdiyev’s book titled “Goris-2010: season of theatre of the absurd”