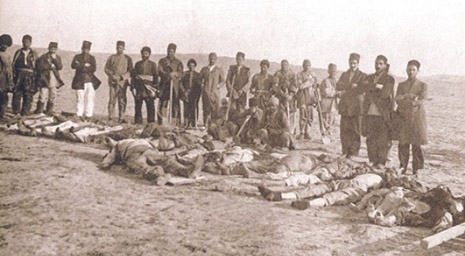 The intention of striking a heavy blow on the national forces of Azerbaijan emerged after the events of March 1918. Firstly, to have a complete authority in Baku it was necessary to obstacle the formation of the national army and its strengthening, because it could become the stronghold of national forces, S.Shahumyan could never agree with the intention of the Muslim nationalists to make Baku the catital of Azerbaijan. The idea of the loss of Baku was the loss of the Southern Caucasus for Russia once and for ever (at the same time, is was loss of hope to the creation of‘‘Great Armenia’’), it terrified him, it meant the reinforcement of national forces in Baku. Therefore S. Shahumyan thought that it was necessary to take decisive steps before the reinforcement of the units of the Muslim army in Baku. The objective and subjective conditions which had emerged in Azerbaijan and around Baku obliged him to do it at the end of March of 1918. On the one hand, the Soviet of Baku was deprived of the opportunity to get help from Russia because of the loss of ties with the North, on the other hand, it had been deprived of Mugan, the source of grain of the country.

It was impossible to think about existence of the Baku Soviet without these two strategic bulwarks. And finally, the national army units of Azerbaijan locating in Shamakhi and Hajiqabul closed the roads of the Baku Soviet to the West as well. The movement of the units of the national army could put an end to the reactionary intentions of Shahumyan and his supporters who longed for absolute authority in Baku and wanted to spread their influence and power on all the Caucasus. The extreme Bolshevik and Dashnak elements understood that the only way to strengthen in Baku, make it a Bolshevik and Armenian town, and not to give it to the Azerbaijanis was to ‘‘teach a lesson’’ to the Azerbaijanis. Only measures of violence could have saved them from bankruptcy. In terms of ideology, acts of mass slaughter committed by the extreme Bolshevik and Dashnak forces of Baku, inspired by the Russian Bolshevik government, extended their political life for a few months in reality. S. Shahumyan admited with great fear that Musavat Party had become the strongest political party in the Caucasus, it was also the strongest political rival of the Bolsheviks, he believed that he could concentrate political authority of Baku in his hands for a few months after committing slaughters.

Addressing to the national forces fighting for the independence of Azerbaijan, S.Shahumyan said: ‘‘I would give you a cemetery instead of an independence for Azerbaijan’’. His appeal was addressed to all the Muslim population of Baku. His purpose was to clear all the Muslims off Baku, to include it into Armenia. Shahumyan looked for a pretext in order to attack the peaceful people.

Officers participating in the national liberation movements of Azerbaijan wanted to send weapons to the voluntary groups on March 30, 1918. The Baku Soviet headed by S.Shahumyan ordered to surrender these weapons. The officers of the National Salvation Movement did not obey this order and loaded the weapons to ‘‘Evelina’’. When the ship was ready to sail, a group of sailors with an armed group of Armenians attempted to confiscate the weapons. While the Azerbaijani officers tried to obstacle them, both sides opened fire and there were losses from both sides. S. Shahumyan using it as a pretext, raised the Dashnak and Bolshevik forces against the Muslims. Thus, the plan prepared by Shahumyan against the Muslim population of Baku began to be implemented. S.Shahumyan and his supporters organized the slaughter of the Muslim population of Baku at the end of March .

The massacre lasred three days, according to one of the witnesses both the Muslims and Dashnaks followed attentively the negotiations on the surrender of weapons.. When there appeared the chance of lessening the tension, the Armenians standing in ambush on the road to Shamaki took to provacation and fired at the Bolshevik patrols. This was a sign to begin the slaughter of the Muslim population in the city.

Ordered by S. Shaumyan that night the armed detachment of Asiryan attacked the headquarters of Musavat Party captured it after an intensive skirmish. According to Asiryan, there was a special laboratory preparing bullets and explosives in the headquarter of the party. The entire city turned into ‘‘hot boiler’’ at night on March 30th. The Armenian butchers did not pity the Azerbaijani Bolsheviks, too. They declared that all the Muslims had to be slaughtered regardless of of the person, conviction and party membership. They killed the Persian merchants from Iran for being Muslims. Thousands of Azerbaijanis were slaughtered within a few days. According to various authors the number of the slaughtered counted between 10 and 15 thousand.

Thus, the Baku Bolsheviks managed to establish the soviet power in Baku on the account of arms and tragedies. But they did not want to suffice with it. Making use of the weakness of the national army and of the differences in the Transcaucasian Seym, the Bolsheviks did not conceal their intention to move torwards the west. According to them, had they been more decisive, they could have captured much more territories by the spring of 1918. Shahumyan wrote like this in his letter to Lenin: “It would have been better if we had gone there (to Gandza) with some forces after the civil war. Then the situation could have been much more suitable”.

According to the leaders of the Baku Bolshevik there was a good chance to attack Gandza in the January of 1918. where the national forces of Azerbaijan were. The national forces of Azerbaijan were still weak for that time. They did not have ties with Turkey. Returning from the front the Russian troops gathered in Baku could have helped to capture Gandza. The term of military mobilization declared by the Revolutionary Defence Committee was prolonged by the People’s Commissars of Baku for another months. The People’s Commissars of Baku had a great army on the eve of declaration of the independence of Azerbaijan. This army consisted mainly of the Russian Bolsheviks and Armenians. The leaders of the Baku Soviet, who relied on the recruited armed groups, intended to occupy not only the territories of Azerbaijan, but also those of the whole Transcaucasia with a speedy march. The commissar of military navy operations Q.Korqanov declared that the masses of Armenia and Georgia waited for the Red Army impatiently, therefore they had to think of a sudden and unexpected attack.

The chairman of the People’s Commissars of Baku S.Shahumyan was the organizer and inspirer of this plan. Appointed by Lenin as Extraordinary Commissar of Transcaucasia S. Shaumyan declared that it was necessary to march speedily for capturing the Southern Caucasus. Disguising his plans with bolshevik slogans he relied on the Armenian-Dashnak elements for the realization of his national interests. He gave preference to the Dashnak groups around him and did not doubt that the Armenians living in Yelizavetpol (Gandza), in other places of this province and in Georgia shared his intention. In his letter to the People’s Commissars of Russia he openly declared that it was essential to raise the rebel of the Armenians here and in other places, to overthrow the government in the Transcaucasia and then move to Yelizavetpol. According to the plan of Shahumyan and Q.Korqanov they had to march in two directions – Kurdamir-Yevlax-Gandza and Shamaki-Goychay-Kaxetiya and then towards Tiflis in alliance with L.Bicheraxov’s group dislocated in Iran.

S.Shahumyan relied on the support of Andranik, a butcher, in his attack towards Gandza and from there to Tbilisi. This ruthless butcher, who had slaughtered innocent peaceful Muslims declared that he recognized the power of the soviets in Baku and was ready to fulfill the order of the new Extraordinary Commissar of the Caucasus.