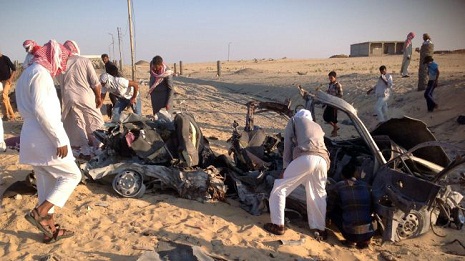 Two women were killed after rockets fired by militants hit a house in Rafah, security and medical sources announced Feb.1. The attack left two other women and two children injured, PressTV reported.
Another woman was killed by a stray bullet after Egyptian forces opened fire on the militants in the same town. The firefight also saw two other people wounded.

Moreover, security forces shot a man at the checkpoint in el-Arish after he violated a curfew which has been in place since October. The incident did not result in any fatality.

The late Sunday incidents were the latest in a string of attacks in the restive area, which has seen a significant surge in violence since Egypt’s first democratically elected president Mohamed Morsi was deposed in July 2013.

The military-backed government of General Abdel Fattah el-Sisi has been involved in a heavy handed crackdown on followers of the Muslim Brotherhood.

The so-called Ansar Bait al-Maqdis group has claimed responsibility for almost all attacks in Sinai, including the one which killed dozens on Jan.29.

Some 44 people were killed and dozens of others injured in a series of militant attacks across the volatile region on Thursday.

The attack in the provincial capital city of el-Arish saw a massive car bomb exploding outside the headquarters of the 101st Brigade of the Egyptian army.

Other attacks on Jan.30 and 31 also led to killing of two children and seven soldiers.