Aghdam region before and after Armenian Occupation -VIDEO 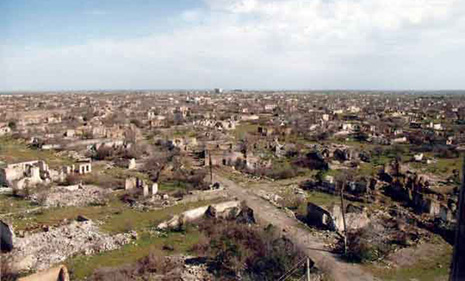 Agdam is located in the valley of rivers Kura and Araz, at the Karabakh plateau close to mountains of Lesser Caucasus at the altitude of 410-1365 meters above sea level. Relief here is mostly flat with not high mountains. Rivers Khachin and Gardag flow through the territory of the district. More that 1700 hectares are occupied by forests. In the district limestone, gravel and sand are extracted.

First time Agdam was mentioned in historical documents in 1357. There is a stone plate preserved at the ancient cemetery dated 1174 that informs that here was an ancient fortress located. This information is confirmed by ancient stone quarry in Shakhbulag settlement near Agdam where limestone was extracted. Exactly this stone was used for construction of the fortress called Agdam (white roof).

The occupation of Aghdam was the third painful loss for Azerbaijan after the invasion of Lachin and Kalbajar around Nagorno-Karabakh. As result of the Armenian armed forces` attack on Aghdam the town was razed to the ground.

The Armenians destroyed historical monuments, cemeteries, hospitals, libraries, schools, offices and facilities in the occupied territory. 122 villages, around 24,000 residential buildings, 48 industrial and construction enterprises, 160 schools, 65 health centers, 373 cultural centers, 1 theater, 3 mosques and 2 museums were burnt down and completely destroyed.
Most of the historical monuments were destroyed following the Armenian occupation. These include the Khanoglu tomb (17th century), the man­sion of Karabakh Khan Panahali (18th century) and his tomb (19th century), and the twin-minaret Aghdam Juma mosque (1870).

As a result of the occupation of Aghdam, Azerbaijan faced material damage worth a staggering $6.179 billion. The damage inflicted to the region`s agriculture alone is estimated at 992.8 million manats ($1.272 billion). Over 6,000 people died during the fighting in Aghdam.

The Armenian invaders also depleted the natural resources of the region after the occupation, according to the facts revealed by a center of the Ministry of Ecology and Natural Resources of Azerbaijan.

According to the ministry, the eastern sycamore trees aged up to 400 years and other tree species were destroyed in the occupied territories and currently are about to be effaced from the world flora treasure. Arsons committed in the occupied villages of Aghdam by Armenian soldiers resulted in the perishing of various partridges, pheasants and vipers, which are included in the "Red Book" and the International Union for Conservation of Nature and Natural Resources Red List of Threatened Species.

While the Armenians ravage the natural resources of the occupied Azerbaijani lands, the people of these regions have to live the life of refugees and IDPs. Though they have always enjoyed the Azerbaijani government`s care, they long to return to their native lands and see the enemy punished for the injustice that has caused their suffering.

The ongoing illegal occupation of Aghdam and other territories of Azerbaijan as well as the plight of the Azerbaijani civilians expelled from their native lands serve as yet another reminder for the international community to vigorously push for justice, which can only be restored once the occupation ends and the displaced people are allowed to return to their homes.

Armenia occupied over 20 percent of Azerbaijan`s internationally recognized territory, including Nagorno-Karabakh and seven adjacent regions, after laying territorial claims against its South Caucasus neighbor that had caused a lengthy war in the early 1990s. The UN Security Council has adopted four resolutions on Armenian withdrawal, but they have not been enforced to this day.