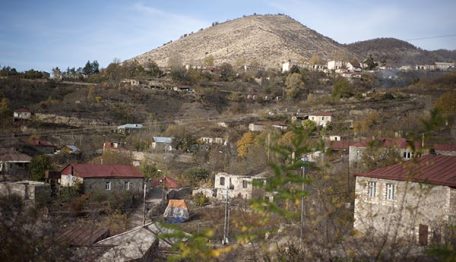 1.2. The Nagorno-Karabakh Autonomous Oblast of the Azerbaijan SSR.
As far as Nagorno-Karabakh is concerned, in response to territorial claims of the Armenian SSR regarding this part of Azerbaijan, on 5 July 1921, the Caucasian Bureau of the Central Committee of the Russian Communist (bolshevik) Party decided that:

Taking into consideration the necessity of national peace between the Muslims and the Armenians, the importance of the economic relations between Upper and Lower Karabakh and the permanent relations of Upper Karabakh with Azerbaijan, Nagorno-Karabakh shall be retained within the boundaries of the Soviet Socialist Republic of Azerbaijan and broad autonomy shall be given to Nagorno-Karabakh with Shusha city as an administrative center.”

On 7 July 1923, the Nagorno-Karabakh Autonomous Oblast (NKAO) was established in the mountainous part of Karabakh, where majority of population was Armenian. The town of Khankandi was defined as the administrative centre of the autonomy. In September 1923, the name of the town was changed to Stepanakert after Stepan Shaumian, dashnak, and “bolshevik” leader.

The borders of the NKAO were defined in that way to ensure the majority to the Armenian population. According to the population census of 12 January 1989, the population of the autonomous oblast was around 189,000 persons; of them: around 139,000 Armenians – 73,5 %, around 48,000 Azerbaijanis – 25,3 %, around 2 000 representatives of other nationalities – 1,2 %. At the same time, about 200,000 Azerbaijanis compactly resided in Armenia at that time were refused even cultural autonomy both on the part of the USSR central government, and the government of the Armenian SSR.

The allegations of discrimination against the Armenian population of Nagorno-Karabakh do not stand up to scrutiny. In reality, the NKAO possessed all essential elements of self-government.

The Soviet of People’s Deputies of the NKAO — the government authority in the region — had a wide range of powers. It decided all local issues based on the interests of citizens living in the oblast and with reference to its national and other specific features. Armenian was used in the work of all government, administrative and judicial bodies and the Procurator’s Office, as well as in education, reflecting the language requirements of the majority of the region’s population. Local TV and radio broadcasts, publication of newspapers and magazines in the Armenian language were guaranteed in the NKAO.

In the period 1971 to 1985, 483 million rubles of capital investment were channeled into the development of the NKAO, 2.8 times more than in the previous 15-year period. Over the preceding 20 years, the volume of per capita capital investment had increased nearly fourfold (226 rubles in 1981-1985 against 59 rubles in 1961-1965). Over the preceding 15 years, per capita housing construction had amounted to 3.64 square meters in Azerbaijan as a whole, whereas for the NKAO the figure was 4.76 square meters. The number of hospital beds per 10,000 inhabitants was 15 per cent higher than in the rest of the republic.

The fact that provision of housing, goods and services was superior to that in the republic as a whole was typical of the social and cultural development of the oblast. Per capita living space in apartment buildings in the region was almost one third greater than the average for the republic, while rural dwellers had 1.5 times more living space than peasants in the republic as a whole.
The population of the oblast had access to greater numbers of medium-level medical personnel (1.3 times more) and hospital beds (3 per cent more). There was a more extensive network of institutions providing cultural and information services (more than three times the number of cinemas and clubs and twice as many libraries), and there were 1.6 times more books and magazines per 100 readers.

In fact, the NKAO was developing more rapidly than Azerbaijan as a whole. For example, whereas industrial output in the republic increased threefold between 1970 and 1986, in the NKAO it grew by a factor of 3.3 (the rate of growth there was 8,3 per cent higher). In 1986, 3.1 times more fixed capital assets were brought into use in the oblast than in 1970; in the republic the figure was 2.5. As far as basic social development indicators were concerned, the NKAO exceeded the average republic-wide standard of living indicators in the Azerbaijan SSR. There was significant progress in the development of cultural establishments, both in the oblast and throughout the republic.

In the 1988/89 school year, there were 136 secondary general education schools in Nagorno-Karabakh using Armenian as the language of instruction (16,120 pupils) and 13 international schools (7,045 pupils). In Azerbaijan as a whole during that school year, there were 181 Armenian schools (20,712 pupils) and 29 international schools (12,766 pupils). The State Pedagogical Institute in Khankandi had more than 2,130 students, mostly Armenian, studying in its Azerbaijani, Armenian and Russian divisions. In addition, Nagorno-Karabakh had dozens of specialized secondary schools and vocational training institutes offering instruction in Armenian and Russian.

Five independent periodicals appeared in the Armenian language. Unlike other administrative territorial units of Azerbaijan located far from the capital of the republic in mountainous areas, the NKAO was equipped with technical infrastructure for receiving television and radio programmes.

As has been seen above, and as the existence and development of the NKAO within Azerbaijan confirms, the form of autonomy that had evolved fully reflected the specific economic, social, cultural and national characteristics of the population and the way of life in the autonomous region.