Meghan Markle spreads her wings in ways reminiscent of Diana 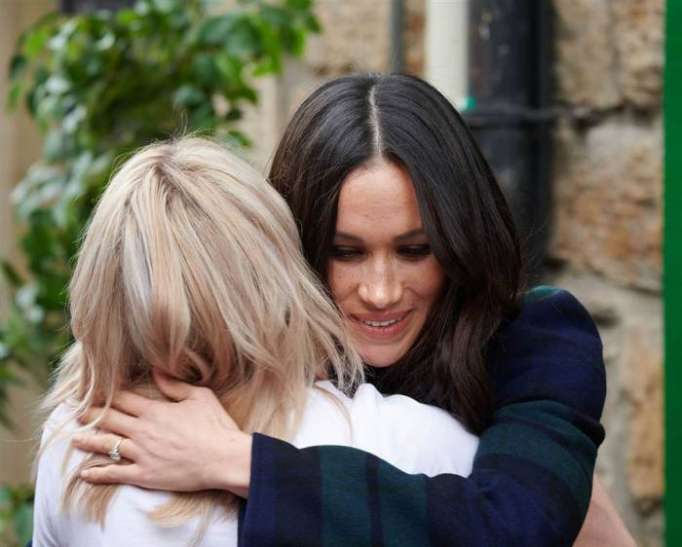 With three months to go before she becomes an official member of Britain's royal family, Meghan Markle is getting to know her adopted country and deciding on the charitable causes she'll champion after marrying Prince Harry.

The American actress recently quietly stopped by a mosque in the shadow of last year's Grenfell Tower fire, which was Britain's deadliest blaze since World War II. The fire killed 71 people and profoundly shocked the country. For many, it has become a symbol of enduring racial and economic disparities in the U.K.

One worker at Al-Manaar Muslim Cultural Heritage Centre described how the soon-to-be royal donned an apron and served rice during the "private visit" a few weeks ago.

Royal officials would not directly discuss Markle's time at the mosque, which was first reported in local media.

Markle has yet to announce the causes she plans to support after her marriage to Queen Elizabeth II's grandson.

But as the first woman of color to join the royal family, Markle has an unprecedented opportunity to shine a light on issues affecting minorities, analysts say.

“In terms of the issues that matter to people of color in this country — race equality, being able to succeed based on merit, personal development — she is going to help by her presence alone,” said Harris Beider, professor in community cohesion at Coventry University.

Since announcing their engagement in November, Markle and Harry have toured the English city of Nottingham as well as parts of Wales and Scotland. They also spent an afternoon in Brixton, which has been dubbed "London's Harlem."

On Tuesday, the couple greeted crowds in front of Edinburgh Castle in Scotland and then stopped by at a local cafe that employs and distributes food to the homeless. While there, the Los Angeles native hugged Alice Thompson, who co-founded the organization. British royals seldom are seen embracing members of the public, so Markle's gesture was reminiscent of Harry's late mother Princess Diana — who also paid secret visits to charities and community groups.

What makes Markle’s visit to Al-Manaar and other gestures stand out is how her personal background enables the public to relate to a member of the royal family in a new way, according to Dawn Foster, a Guardian newspaper columnist who is writing a book about the Grenfell fire.

“Having a member of the royal family that wasn’t born into aristocracy, who has the experience of divorce, who has moved countries, makes a difference and makes it easier for survivors to relate to her,” she said. “They can feel free speaking with her about race in modern Britain, and their different socio-economic experiences.”

Prime Minister Theresa May was pilloried after visiting the smoldering building without meeting with survivors, citing security concerns.

The queen helped quell tensions the next day, meeting victims with her grandson Prince William.

Located less than a mile away from Grenfell, the Al-Manaar center became a hub of community organizing efforts on the day of the inferno. Local residents poured in with donations of clothing, food, toiletries and other supplies.

It is also no stranger to royalty.

In September, Princes William and Harry visited the building to meet with families affected by the fire, while Prince Charles officially opened the building in 2001.

“The visits of high-profile people are uplifting to all of us — the victims, the relatives, the volunteers and all the people who have been working here,” said Abdurahman Sayed, the center's executive director.

Markle is at home with using her fame to highlight charitable causes. She served as a global ambassador for the children’s charity World Vision and traveled with them to Rwanda to learn more about how clean water affects daily life. She also served as an advocate for U.N. Women.

“I do think that it’s these tiny acts of generosity or grace or even just understanding that allow us to really make a difference on a much larger level,” she said in a video promoting World Vision made before her engagement.