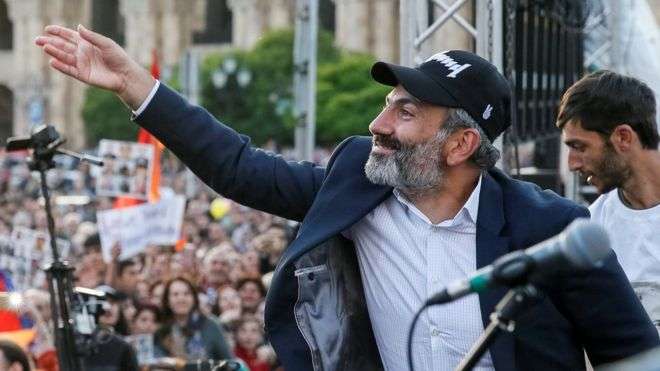 Armenia's parliament is set to elect opposition leader Nikol Pashinyan as the country's new prime minister in a watershed moment for the country.

Mr Pashinyan, who has led weeks of anti-government protests that forced former Prime Minister Serzh Sargsyan to resign, is the only candidate.

Armenia's ruling Republican Party earlier said it would not put up a candidate in a bid to ease tensions.

The Republican Party has dominated Armenian politics since 1999.

Mr Sargsyan, who had served 10 years as president, stepped down on 23 April just days after being sworn in as PM. He had been accused of trying to cling to power.

All 47 opposition members of parliament have pledged to vote for Mr Pashinyan, but he will need support from some Republican Party deputies to win the majority he needs in the 105-seat house.

Mr Pashinyan, who has said he will rid Armenia of corruption, poverty and nepotism, called on his supporters to rally on Tuesday as parliament meets for the vote.

He has asked people to meet at Republic Square in the capital, Yerevan, to celebrate what he called "the public victory over hopelessness, emigration and uncertainty.

"Tomorrow, in this square, in this very square a big celebration must take place where the people, the Armenian people will celebrate their victory, their irreversible victory," he said on Monday.

Mr Pashinyan, 42, has said he wants to call snap elections.