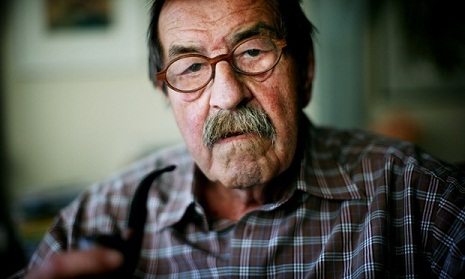 The writer G
Translator Anthea Bell said Grass was “a literary figure of the most enormous stature in postwar German letters, and throughout the world.”

Grass found success in every artistic form he explored – from poetry to drama and from sculpture to graphic art – but it wasn’t until publication of his first novel, The Tin Drum, in 1959 that he found the international reputation which brought him the Nobel prize for literature 40 years later. A speechwriter for the German chancellor Willy Brandt, Grass was never afraid to use the platform his fame afforded, campaigning for peace and the environment and speaking out against German reunification, which he compared to Hitler’s “annexation” of Austria.

Grass was born in the Free City of Danzig – now Gdansk – in 1927, “almost late enough”, as he said, to avoid involvement with the Nazi regime. Conscripted into the army in 1944 at the age of 16, he served as a tank gunner in the Waffen SS, bringing accusations of betrayal, hypocrisy and opportunism when he wrote about it in his 2006 autobiography, Peeling the Onion.

The writer was surprised by the strength of the reaction, arguing that he thought at the time that the SS was merely “an elite unit”, that he had spoken openly about his wartime record in the 1960s, and that he had spent a lifetime “working through” the unquestioning beliefs of his youth in his writing. His war came to an end six months later having “never fired a shot”, when he was wounded in Cottbus and captured in a military hospital by the US army. That he avoided committing war crimes was “not by merit”, he insisted. “If I had been born three or four years earlier I would, surely, have seen myself caught up in those crimes.”

Instead he trained as a stonemason, studied art in Düsseldorf and Berlin, and joined Hans Werner Richter’s Group 47 alongside writers such as Ingeborg Bachmann and Heinrich Böll. After moving to Paris in 1956 he began working on a novel which told the story of Germany in the first half of the 20th century through the life of a boy who refuses to grow.

A sprawling mixture of fantasy, family saga, bildungsroman and political fable, The Tin Drum was attacked by critics, denied the Bremen literature prize by outraged senators, burned in Düsseldorf and became a global bestseller.

Speaking to the Swedish Academy in 1999, Grass explained that the reaction taught him “that books can cause offence, stir up fury, even hatred, that what is undertaken out of love for one’s country can be taken as soiling one’s nest. From then on I have been controversial.”

A steady stream of provocative interventions in debates around social justice, peace and the environment followed, alongside poetry, drama, drawings and novels. In 1977 Grass tackled sexual politics, hunger and the rise of civilisation with a 500-page version of the Grimm brothers’ fairytale The Fisherman and His Wife. The Rat (1986) explored the apocalpyse, as a man dreams of a talking rat who tells him of the end of the human race, while 1995’s Too Far Afield explored reunification through east German eyes – prompting Germany’s foremost literary critic, Marcel Reich-Ranicki, to brand the novel a “complete and utter failure” and to appear on the cover of Der Spiegel ripping a copy in half.

His last novel, 2002’s Crabwalk, dived into the sinking of the German liner Wilhelm Gustloff in 1945, while three volumes of memoir – Peeling the Onion, The Box and Grimms’ Words – boldly ventured into troubled waters.

Speaking to the Paris Review in 1991, Grass made no apology for his abiding focus on Germany’s difficult past. “If I had been a Swedish or a Swiss author I might have played around much more, told a few jokes and all that,” he said. “That hasn’t been possible; given my background, I have had no other choice.”