Tragedy of Genocide of Azerbaijanis 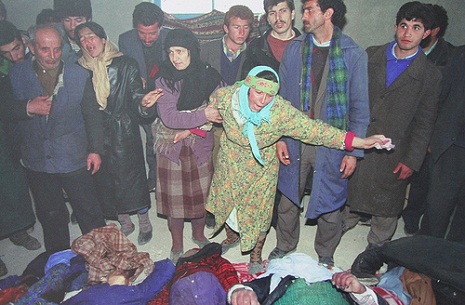 Large-scale bloody campaign of genocide against Azerbaijanis, which continued for two centuries led to destruction of hundreds of villages, which were razed to the ground, and thousands of Azerbaijani people were killed with great brutality.
At the result of ethnic cleansing, genocide and aggression of Armenians against Azerbaijan, carried out consistently for a long period, thousands of people were displaced from native lands and homes.

Each massacre is a bloody page in the history of Azerbaijan.

March genocide – is a genocide committed by the Baku Soviet and Armenian armed Dashnak forces between March 30 and April 3 of 1918 in Baku and in different regions of Baku province, as well as in Shamakhy, Guba, Shaki, Lankaran, Hajigabul, Salyan, Zangezur, Garabagh, Nakhchivan and other areas against the Azerbaijanis. In March-April of 1918, in Baku, Shamakhy, Guba, Lankaran and other areas, the Armenian fascists were executed 50 thousand Azerbaijanis and withdrawn ten thousands of people from their lands.
By Decree of Azerbaijani President Heydar Aliyev, dated March 26, 1998, March 31 is commemorated as the Day of Genocide of Azerbaijanis.

Jomardli genocide – is a genocide committed by Armenian terrorists in 1918 against Azerbaijanis. Jomardli village was at the foot of the Salvarti Mountain, 15 kilometers away from the regional center of Qarakilsa. Jomardli was the biggest Turk village of Qarakilsa. In 1918, the gang of Dashnak Andranik Ozanian shed a blood of people of Qarakilsa and Jomardli was one of the villages subjected to his despotism. More than half of the population was killed, and those escaped of the disaster took refuge in Nakhchivan by passing the mountains, the rocks.

Guba genocide is a genocide committed by the Armenians in Guba. In 2007, while having excavation works for the repair of the city stadium the mass cemetery have been found and the works were cancelled and experts were involved in the area.
Bones found from graves in Guba is related to the victims of the genocide committed by Armenians in 1918 and this fact was confirmed. According to archeologists, a lot of human skulls were taken from the first well and among the children`s skeletons only the whole skeletons of 35 men were found. Later, the 2nd well, full of human bones were found, too.
Genocide of Mountain Jews was committed against the Jews living in the different regions of Azerbaijan, particularly in Guba by the Armenian Dashnaks and Armenian bandit groups in 1918.
As a result of the genocide committed in the territory of Azerbaijan in 1918-1919 by Dashnaks bandit units led by the Armenian culprits Stepan Shaumian, Lalayan, Amazaps around 3 thousand Jewish civilians, who refused to cooperate with Armenians were killed along with Azerbaijanis. In order to realize the notorious "Great Armenia" dream the Armenian nationalists carried out the vandalism, committed mass terror against other peoples living in the South Caucasus region historically, besides Azerbaijanis. All these facts concerning the genocide were proved by hundreds of witnesses, historical documents of that period, the registration documents of the Mountain Jews, numerous written requests of Jewish intellectuals.

Gugark massacre – is a genocide against Azerbaijanis in November 1988 in Armenia’s Gugark region. 21 people were killed in Gugark. Of these, 15 persons were burnt alive. 12 people were living in the village Barkan.
National Security Committee of the USSR had informed about these events but official Moscow, kept quiet. In November killing, looting and burning of houses took a few days in Gugark. The reason was that they were Azerbaijanis.
According to the news agency`s New York Times on December 7, the Armenian radio informed about the resignation of the first secretary of the Communist Party of Armenia in Gugark region and district chairman of the Council only after the completion of the slaughter and withdrawal of Azerbaijanis from these lands.

The genocide of Azerbaijanis in 1988-1989 - as it was managed from a single centre and implemented the stages of this genocide, the character was the same for all the Armenian territory. Everywhere in the first stage, the Armenian bands with the support and control of the police and district heads attacked homes are of Azerbaijanis and demanded them to leave.

During 1988-1989 in the Western Azerbaijan (Armenia) Azerbaijani workers were not allowed in workplaces, and the children in the school, shop, markets refused to sell food and other items to Azerbaijanis, the electricity, phone, water, gas of Azerbaijanis were cut, their living conditions were under intolerable situation. This was a real spiritual, psychological terror that was often replaced with the physical terror.

In most cases Armenians gave a little price for homes of Azerbaijanis, and then threatened them, and finally it had no effect, their homes were set ablaze. Azerbaijanis were forced to arm with fork, ax, etc., burn a fire and watched in the streets. However, at the end of November Armenians suddenly attacked all the villages in Armenia resided by Azerbaijanis.

Within a week, all Azerbaijani villages became empty, their estates, goods were seized and those captured were killed.

Azerbaijanis had to flee barefoot, with open heads in winter to mountains, forests. This was a disaster of not compatible with any human law.

In addition, in more than 6 cities Azerbaijanis along with other nations lived. The number of our compatriots in these settlements were 250 thousand people in 49 thousand 928 families. The names of these residential areas and the demographics so far have not been fully provided by any source.

During the genocide of years 1988-1989 according to information in West Azerbaijan 226 of our compatriots were killed by Armenians, (shot, was intentional met with the car accident, frozen in the mountain roads, etc.), more than 400 people were injured. This is not the final list of our compatriots were killed or wounded by Armenians in those years.

Property in economies of our compatriots was misappropriated by the Armenians without remuneration. The value of that property belonging to the Azerbaijani refugees was calculated at Azerbaijan Refugee Society on the basis of documents and determined approximately as 2.5 billion U.S. dollars of damage. 43789 head of cattle belonging to Azerbaijanis in kolkhoz, 454 660 head of small cattle, a large number of poultry, bee families, 170 cultural centers, 274 schools, 119 libraries, kindergartens, medical centers, mosques, buildings, 1381auxiliary constructions, 2169 trucks,1976, tractors, 3132 rural household appliances, and thousands of hectares of vineyards and orchards left for Armenians.

The total material damage caused to the refugees is 20 billion U.S. dollars.

Black January or Tragedy of January 20 – is a terror act committed in night of January 19 to January 20 of 1990 by the Soviet Army, together with the Armenian bandit groups against the people of Azerbaijan.
List of heroic struggle for freedom and territorial integrity of Azerbaijan, as well as of the date of 20 January It was included in the history of fight for freedom and territorial integrity of Azerbaijan as a heroism page and in January 20, 1990, the people went on streets to protests against aggressive actions of Armenia and its territorial claims, with support of former Soviet leadership, and using of armed weapons against protestors led to unprecedented tragedy in Azerbaijan, Baku. Those terrible days of the country, people, which preferred the freedom, honor and dignity above all, became martyrs.

In the operation called "Udar" ("Blow") prepared by the USSR Ministry of Defense, the Interior Ministry and KGB the special "Alfa" and the USSR State Security Committee’s "A" provocative groups carried out a key role in the operation. As a result of Soviet invasion 137 civil citizens were killed in Baku by the Soviet troops, more than 700 people wounded, 800 people have been wrongfully imprisoned. Among killed there were the representatives of five nations, more than 20 women, and children.

Agdaban genocide – is one of the most brutal crimes committed against humanity, which took place on April 8, 1992, and terrible genocide committed against the people of Azerbaijan by Armenian separatist to capture one of beautiful corners of Garabagh, the fortress gates Kelbajar with the dream to create "Great Armenia". Agdaban genocide is the burning of whole villages, torturing of hundreds of peaceful inhabitants with inhuman tortures, withdrawal from native lands!

The village Agdaban of Kalbajar region consisting of 130 houses was completely burnt by the Armenian separatists, 779 peaceful village residents were met with inhuman tortures.

Khojaly genocide – is a genocide committed by Armenians Armed Forces and Russian regiment No 366 at night of February 25 to 26, 1992 while occupying Khojaly city against the Azerbaijanis.

This tragedy occurred during the Nagorno-Garabakh conflict is one of the most terrible events.

On the night of February 25 to 26 Armed forces of Armenia using armored equipment and military personnel of the 366th motorized infantry regiment left from the Soviet-era in Khankendi (Stepanakert) had occupied Khojaly. Before the attack, in the evening of February 25 the heavy artillery fire was shot. As a result, on February 26 at about 5 o`clock in the morning, Khojaly was in fire entirely. In the encircled city, nearly 2500 people had left the city in the hope to reach the center of Agdam region. However, from 2500 city citizens who left the city, which was razed to grounds 613 became victims of genocide. As a result of the this massacre 63 children, 106 women, 70 old men and women were killed, total 613 residents of Khojaly, 8 families were completely killed, 25 children lost both parents and 130 children lost one of the parents. Among injured 487 peoples 76 were children. 1275 Khojaly citizens were captured, 150 were missing. State and private property suffered damage as of 5 billion rubles in prices as of April 1, 1992.