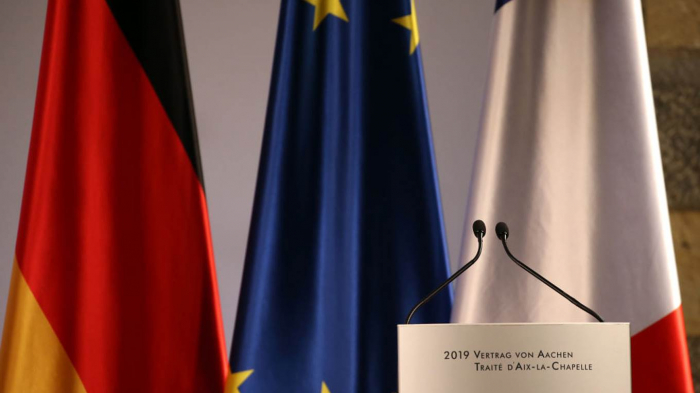 Former German Minister of Foreign Affairs Sigmar Gabriel and Zaki Laïdi of Sciences Po deserve credit for writing dueling commentaries about a recent Franco-German friendship treaty that otherwise might have eluded public attention. If there is something about the new Treaty of Aachen for them to argue about, the agreement must be important.

But, of course, their real argument is not about this particular document, but rather the larger Franco-German relationship as it relates to Europe and the transatlantic community. At a time of deepening uncertainty in Europe, no other topic is worthier of discussion.

For his part, Gabriel overestimates the importance of the new pact, which simply does not have the power to lure Germany into the kind of geopolitical traps that he fears. Still, he is right to point out differences between France and Germany’s traditional approach to maintaining equilibrium within the European community.

After three decades of losing influence, is France now trying to leverage the political chaos from Brexit and Donald Trump’s US presidency to secure Germany’s support for reshaping Europe according to French terms? Gabriel seems to suspect as much. Yet Laïdi insists that France has no such plan. In his view, the problems afflicting Germany’s own diplomatic relations with Europe owe more to German intransigence than anything else.

Each of these perspectives seems to miss an even more troubling reality: namely, that both France and Germany are too weak to muster a consistent response to the world’s most pressing challenges. As Laïdi himself points out, it is Trump, not France, who is questioning the need for NATO. And while Trump is hardly the first US leader to criticize Europeans for not contributing enough to common defense, he is the first who seems actually to need to be persuaded of NATO’s importance. That is shocking, and must be taken seriously. NATO is the most efficient and affordable defense system that Europeans will ever have.

It is an open question why Trump loves to rebuke Germany more than any other European country, including France. Some amateur psychoanalysts will point to his own German heritage. But, then, how does one explain his flirtation with Saudi Arabia, or his seemingly predetermined approach to most other countries, for that matter?

It is more likely that Trump’s snippy anti-German rhetoric reflects his long-held views about how the world works. He has little respect for a country that has such a strong economy but no apparent instinct for defending itself or dealing with hard power. France may have nationalist and even anti-American impulses, but at least it knows what it wants. Hence, even during the Iraq War, the Franco-American conflict had the look of a choreographed routine, whereas German-American relations were boiling over with emotions.

There is an important debate to be had about the future of liberal democracy and the rules-based international order. But Western values cannot prevail in the absence of Western power. The French readily accept this. And while Germany is at least moving away from its denialism about power, it is not doing so fast enough to keep up with the pace of global change.

Indeed, when Japanese Prime Minister Shinzo Abe recently asked German Chancellor Angela Merkel to do more to protect freedom of maritime navigation in Southeast Asia, she replied shyly that her government would think about it. Had she gone one step further and pledged a robust German contribution to the cause, she would have received a warm welcome from the German media and large parts of the public.

It is not as if Germany is just a “nice guy” who wants to please everyone. German politicians and business leaders will put on an innocent face when insisting that the Nord Stream 2 gas pipeline connecting Germany and Russia is apolitical and harmless. But to Poland and the Baltic countries, that is a preposterous assertion. Still, Germany is investing a lot of political capital in maintaining a common European position vis-à-vis Russia, and in support of Ukraine. So, what is the real German strategy?

Unlike in France, the government in Berlin has only a narrow mandate in foreign and security policy. As such, the Germans understand that they need the European framework to pursue their interests in this realm. That means holding Europe together is not just a lofty mission, but also a vital national objective.

At the same time, too many Germans fail to understand that without the US-led defense system, the nationalist threat to European unity will increase. The divisions caused by the Trump administration’s approach to Europe would pale in comparison to those resulting from a full US withdrawal.

The new Treaty of Aachen is powerful for its historical symbolism. But it also risks becoming a projection screen for nostalgic images. Moreover, it does not meet France and Germany’s own ambitions for developing new ideas for Europe. This is forgivable, even understandable. It is time for other Europeans, including those to the east, to make contributions of their own.

As French President Emmanuel Macron seems to understand, national interests can be better served within the European Union than outside it, or by standing in opposition to it. This is just as true for Germany, Poland, and any other member state as it is for France. The question is how Europe should be organized to make the best use of its large but fragmented resources. While the French traditionally tend to focus on the old “core” of Europe, the Germans would prefer to reach out to their eastern neighbors, whom they see as difficult but necessary partners. Must the two approaches be mutually exclusive?