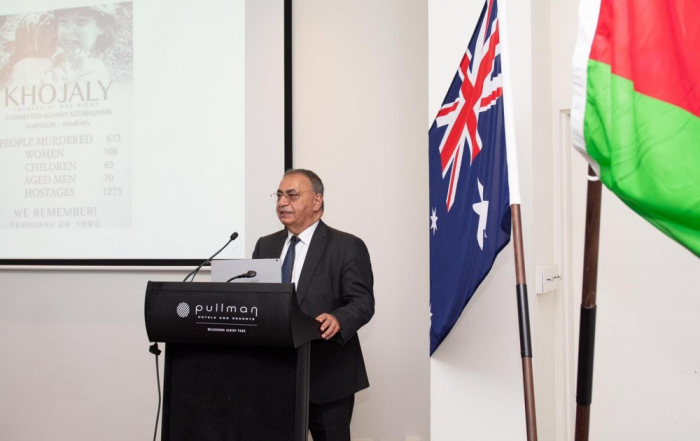 An event commemorating the 27th anniversary of the Khojaly genocide has been held in Melbourne, Australia.

Co-organized by the Azerbaijani Cultural Association of Victoria and the country’s embassy in Australia, the ceremony brought together members of the Parliament of Victoria, public figures, Azerbaijani citizens living in Melbourne and media representatives.

The event featured the screening of a documentary highlighting the Khojaly genocide, which was produced with the support of the Heydar Aliyev Foundation.

Speaking at the event, Azerbaijan's chargé d'affaires to Australia Eljan Habibzade provided an insight into the Khojaly genocide which was committed by the Armenian armed forces 27 years ago. He said that a number of countries, as well as some states of the USA have already recognized the Khojaly genocide.

MP Asim Mollazade emphasized that international community should take measures against the perpetrators of this crime. He hailed the activities of the “Justice for Khojaly” campaign initiated by Vice-president of the Heydar Aliyev Foundation Leyla Aliyeva in this regard.