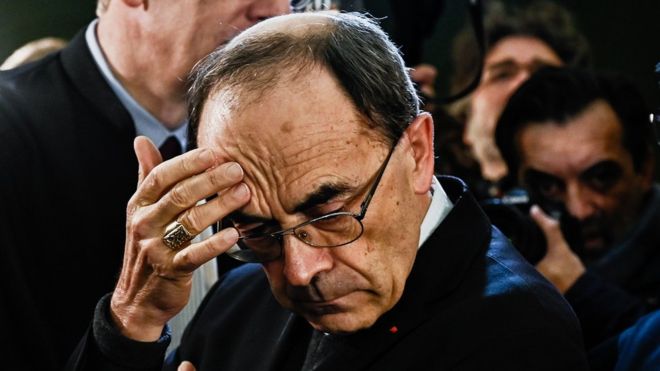 Pope Francis has turned down a French cardinal's offer to resign over a Church sex abuse cover-up.

Earlier this month, Cardinal Philippe Barbarin was found guilty of failing to report historical allegations of assaults by a priest in his diocese.

He is appealing against the verdict, but offered to quit as France's most senior Roman Catholic cleric on Monday.

Although the Pope has rejected the resignation, Barbarin said he would stand aside "for a while".

The 68-year-old archbishop of Lyon was given a six-month suspended prison sentence earlier this month.

At the centre of the accusations is the priest Bernard Preynat, who allegedly assaulted dozens of boy scouts in the 1980s and 1990s.

Barbarin became aware of the allegations in 2014. He informed the Vatican and removed Mr Preynat from his post but failed to inform police.

In a statement on Tuesday, he said the Pope had rejected his offer to resign, "invoking the presumption of innocence". Barbarin also said he would step aside pending the appeal.

The Vatican confirmed that the pontiff had not accepted the resignation. "The Holy Father left the cardinal free to take the most appropriate decision for his diocese," the statement added.

Mr Preynat lawyer's has said his client has admitted the abuse, but that the statute of limitations precludes prosecution. Officials argue that some offences can still be prosecuted and a criminal case has been opened against the priest.

The scandal is the subject of a film, By the Grace of God, which has been released following a legal challenge.