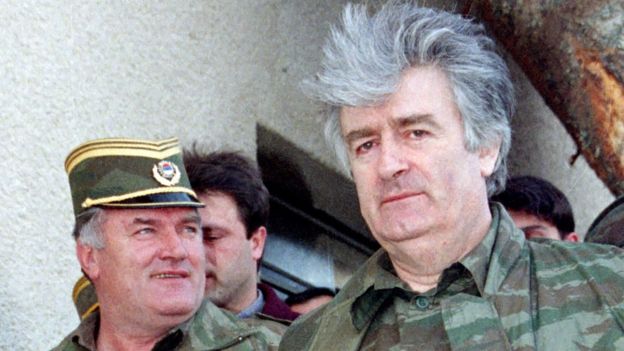 A UN court has rejected an appeal by Bosnian Serb former leader Radovan Karadzic and increased his sentence to life in prison.

The tribunal on Wednesday ruled that his initial sentence was too light.

In 2016 Karadzic, 73, was found guilty of genocide and war crimes by a UN tribunal in The Hague and given a 40-year prison sentence.

He planned the Srebrenica massacre of July 1995 - the worst atrocity in Europe since World War Two.

Karadzic had said his conviction was based on "rumours". He launched an appeal against his sentence last year, telling judges that the expulsion of Muslims and Croats in the 1990s had been "myths".

Karadzic, a former psychiatrist, was president of the Bosnian Serb entity Republika Srpska during the Bosnian War in the 1990s.

The tribunal rejected the majority of Karadzic's appeal.

Judge Vagn Joensen said the original sentence was too lenient, given the "sheer scale and systematic cruelty" of his crimes.

The former leader cannot appeal the tribunal's decision. He sat in the chamber on Wednesday and did not react to the ruling.

Correspondents say the ruling is likely to be one of the last remaining hearings stemming from the bloody break-up of the former Yugoslavia in the 1990s.

Gasps, a whistle, applause and a collective sigh of relief was how relatives in the public gallery reacted.

Many have spent more than two decades in pursuit of justice. Back and forth between The Hague and the killing fields where human bones are still being found today. Witnessing the political mastermind behind their suffering being told he will be confined to a cell for the rest of his life, was as close to justice as they feel they can get.

As the survivors filed out into the sunshine, on to a daisy strewn lawn, I asked Munira Subasic - a mother whose husband and only son were slaughtered in Srebrenica - how she felt about the fact the architect of her suffering would never walk free.

"He deserves that," she told me. "I will never see my son again. [Karadzic] should just stay in a black hole. I will live with the pain. This should be a message to the world, to war criminals."

Satko Mujagic, who watched as his friends were taken away to be executed at the Omarska death camp, told me their victory was bittersweet. "I'm satisfied. I'm happy I'm here. But many didn't survive to see this so we cannot say we are truly happy."

In its original verdict, the UN tribunal ruled that Karadzic and other leaders were responsible for the "organised and systematic pattern of crimes committed against Bosnian Muslims and Bosnian Croats".

At Srebrenica, Bosnian Serb soldiers slaughtered nearly 8,000 Muslim men and boys in a "safe area" protected by Dutch peacekeeping forces for the UN.

Judges also held Karadzic responsible for the siege of Sarajevo, a campaign of shelling and sniping which lasted more than three years and led to the deaths of an estimated 10,000 civilians.

After the war, Karadzic hid for years masquerading as an expert in alternative medicine before his eventual arrest in Serbia in 2008.

Former Bosnian Serb army commander Ratko Mladic was sentenced to life in prison on similar charges of war crimes and genocide in November 2017.