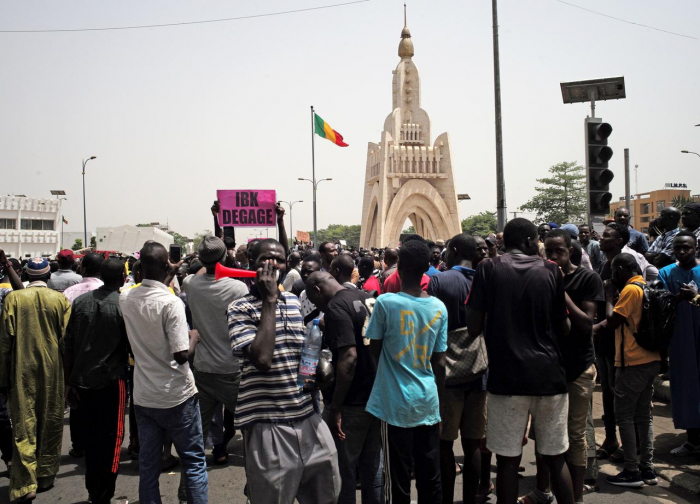 Thousands rallied in the Malian capital Bamako on Friday to protest at the failure of the government and international peacekeepers to stem rising ethnic and jihadist violence, notably the massacre of around 160 villagers last month, Reuters reported.

The protest was one of the largest in Mali in recent years.

It followed the March 23 massacre by suspected militiamen from the Dogon ethnic group of rival Fulani herders in the village of Ogossagou, the deadliest act of ethnic bloodshed in West Africa’s Sahel region in living memory.

Six years after French forces intervened to halt a jihadist advance from Mali’s desert north, the violence has spread across the Sahel, an arid region between the Sahara desert and Africa’s savannas, to neighboring Burkina Faso and Niger.

Keita has responded to the attack on the Fulanis by disbanding an anti-jihadist vigilante group, whose fighters are suspected of being behind the massacre.

Over 200 people had been killed by anti-jihadist self-defense groups in Mali since the start of this year, according to the United Nations, which has dispatched human rights experts to investigate the March attack.

“We hold the government responsible for the deterioration of the situation,” said former minister Hamadoun Dicko.

Friday’s march was largely peaceful, although at one point police fired tear gas and some protesters threw stones in response. Organizers have called for another protest next week.