'Our country is full': Trump claims emergency during border visit 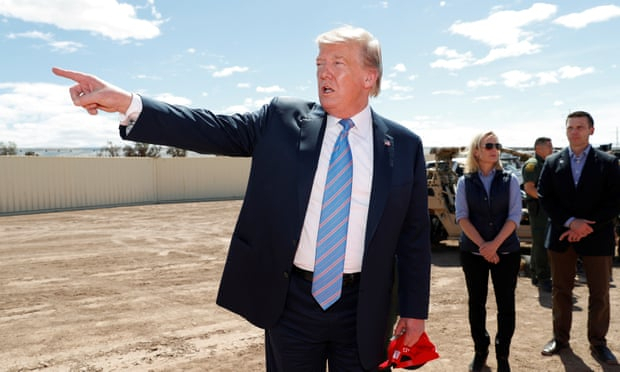 Donald Trump once again insisted the US immigration system was overburdened and illegal border crossings must be stopped on a visit to the US-Mexico border in California.

Trump traveled to Calexico, California, on Friday to view a section of the border barrier and participate in a roundtable on immigration.

“There is indeed an emergency on our southern border,” Trump said at the briefing, adding that there had been a sharp uptick in illegal crossings. “It’s a colossal surge, and it’s overwhelming our immigration system. We can’t take you anymore. Our country is full.”

Trump, as he so often does, mixed fact with fiction when warning of the threat.

He described the section of border barrier he visited as new, even though it was a long-planned replacement for an older barrier. The Trump administration has not completed any new mileage of wall or fence anywhere on the border since taking office.

When complaining about the Flores legal settlement that governs treatment of migrant children and families, he blamed “Judge Flores, whoever you may be”. But the settlement is actually named after Jenny Flores, a 15-year-old girl from El Salvador whose 1985 detention by US immigration enforcement (then known as the Immigration and Naturalization Service) was the subject of a class-action lawsuit. Flores was being held in a facility with adult men and women, and was regularly strip-searched. Human rights attorneys sued on her and other minors’ behalf.

Trump also downplayed the claims of people seeking asylum at the border, declaring without evidence that many were gang members while comparing some of their efforts to find safety in the US to the special counsel Robert Mueller’s investigation of Russian interference in the 2016 elections.

Trump has been increasingly exasperated at his inability to halt the swelling number of migrants entering the US, including thousands who have been released after arriving because border officials have no space for them. Arrests along the southern border have soared in recent months, and border agents were on track to make 100,000 arrests or denials of entry in March, a 12-year high. More than half of those are families with children.

Before departing for California, Trump told reporters in Washington he was considering imposing an unspecified economic penalty on Mexico unless it helps alleviate the United States’ drug and immigrant flows, even though much of the drug trade is not carried out by migrants but by professional crime gangs that send narcotics to the United States in vehicles through official ports of entry.

“If they continue that, everything will be fine. If they don’t we’re going to tariff their cars at 25%.”

“Also, I’m looking at an economic penalty for all of the drugs that are coming in through the southern border and killing our people,” Trump said.

As Trump traveled to California, 20 states filed a motion seeking to block the president from diverting federal funds to build a border wall.

Protesters who had gathered near the barrier flew a balloon depicting Trump as a baby.

And the California governor, Gavin Newsom, who plans to travel to El Salvador this weekend to meet with officials and NGOs about the causes of migration, issued a sharp rebuke to the president’s push for Congress to pass legislation that would tighten asylum rules.

“Since our founding, this country has been a place of refuge – a safe haven for people fleeing tyranny, oppression and violence,” Newsom said in a statement. “His words show a total disregard of the constitution, our justice system, and what it means to be an American.