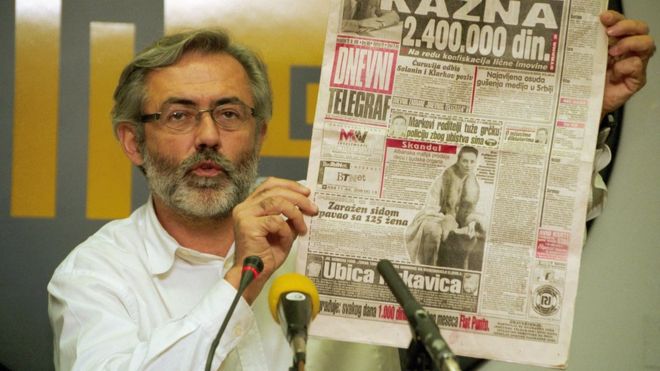 Four former Serbian spies have been jailed for the murder of journalist Slavko Curuvija in 1999, BBC reported.

A Belgrade court jailed two of the defendants for 30 years each, while two others received 20-year sentences.

Curuvija, an outspoken critic of the late Serbian leader Slobodan Milosevic, was gunned down outside his apartment.

Media freedom group Reporters Without Borders said it was the first time in recent history that anyone had been jailed for killing a journalist.

In its verdict, the court said an "unknown person" had ordered the hit. Curuvija's family have in the past accused Milosevic, who died in 2006.

"[This] sends a clear message that crimes against dissenting voices cannot remain unpunished," the Slavko Curuvija Foundation also said in a statement.

He wrote several reports on Kosovo, including a series of articles on political prisoners in what was then Yugoslavia.

His publications were fiercely critical of Milosevic, and became targets of a government crackdown on national media.

The journalist was killed in April 1999, days after a pro-government newspaper published an opinion piece alleging that he supported Nato's air strikes on the former Yugoslavia.

The raids were intended to halt Serbian violence against ethnic Albanian civilians in Kosovo, fomented by President Milosevic.

Milosevic died in 2006 whilst on trial for war crimes at a UN court in The Hague.

Mr Curuvija was shot 14 times and died outside his Belgrade apartment in April 1999.

His family believe President Milosevic personally ordered his murder, though no-one has yet been identified.

Four men were eventually charged and, on Friday, convicted. Former secret police chief Radomir Markovic, and Milan Radonjic, who headed the intelligence branch for Belgrade, were jailed for 30 years each.

The court ruled that Markovic had told Radonjic of plans to murder the journalist - Radonjic then conspired with Romic and Kurak to carry out the killing.

According to the indictment, Kurak pulled the trigger while Romic acted as an accomplice.

Markovic is already serving a 40-year sentence for several crimes, including the murder of Serbian President Ivan Stambolic, whose body was found in 2003, three years after he disappeared.

In 2017, both Romic and Radonjic were also acquitted of attempting to murder political opposition leader Vuk Draskovic.