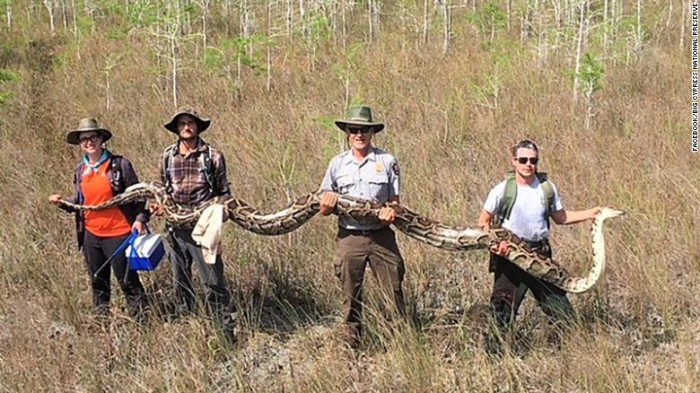 The Burmese python is one of the largest snakes in the world. But even by python standards, this one was colossal.

Scientists caught a female python in the Florida Everglades that was more than 17 feet long, weighed 140 pounds and contained 73 developing eggs.

The snake is the largest python ever removed from Big Cypress National Preserve, a 729,000-acre expanse of swampland west of Miami in South Florida, according to a statement Friday on the preserve's Facebook page.

It shows a team of four researchers, standing apart from one another, holding up the gigantic reptile.

While pythons of all sizes have been found in the Everglades, most of them are between 6 and 10 feet long. The largest one was over 18 feet long and weighed more than 100 pounds, according to the Florida Fish and Wildlife Conservation Commission.

"Using male pythons with radio transmitters allows the team to track the male to locate breeding females," their statement says. "The team not only removes the invasive snakes, but collects data for research, develops new removal tools and learns how the pythons are using the Preserve."
The Burmese python is native to Southeast Asia, but in recent decades the big snakes have become a slithering menace in Florida. The Everglades is a vast area with a tropical climate perfect for pythons to hide and thrive.

State wildlife officials estimate there are as many as 100,000 pythons living in the vast swamps outside Miami. The snakes pose significant threats to native wildlife.

To control their population, Florida even holds competitions encouraging hunters to remove as many of them as possible.

Some 1,600 people registered for the inaugural Python Challenge in 2013, organized by the Florida Fish and Wildlife Conservation Commission. The searchers found only 68 snakes.

In 2017, 25 hunters were paid to euthanize pythons under a $175,000 pilot program by the South Florida Water Management District.

The pythons began turning up in the Everglades in the 1980s, most likely abandoned by pet owners when the snakes got too big to handle. Some pet pythons also may have escaped from a breeding facility destroyed during Hurricane Andrew in 1992.