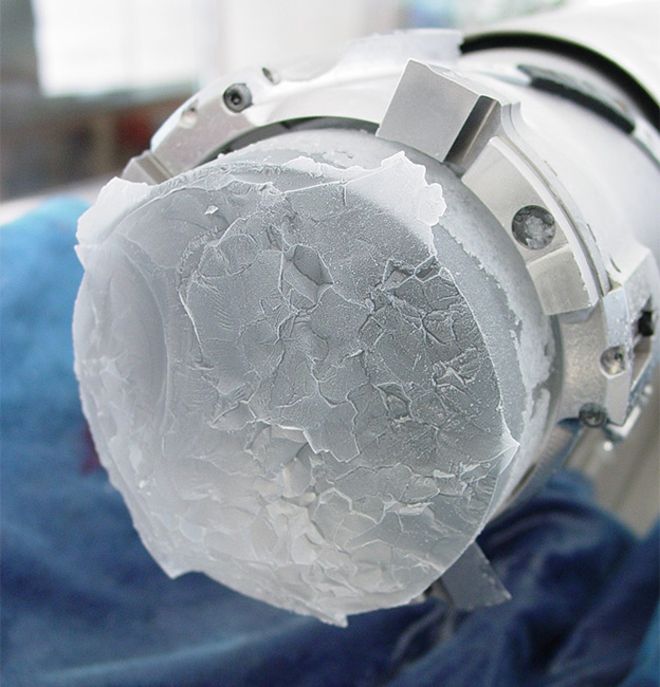 An ambitious project to retrieve a continuous record of Earth's atmosphere and climate stretching back 1.5 million years is officially "go".

A European consortium will head to Antarctica in December to begin the process of drilling deep into the continent's eastern ice sheet.

The group's aim is to pull up a frozen core of material almost 3km long.

Scientists hope this can lead them to an explanation for why Earth's ice ages flipped in frequency in the deep past.

Although it might seem at first glance to be a rather esoteric quest, researchers say it bears down directly on the question of how much the world is likely to warm in the centuries ahead.

"Something happened about 900,000 years ago. The ice age cycles changed from every 40,000 years or so, to every 100,000 years; and we don't know why," Dr Catherine Ritz from the Institute of Environmental Geosciences in Grenoble, France, told BBC News.

"And it's rather important, because if we want to forecast what will happen to the climate in the future, with the increase in greenhouse gases, then we will have to use models, and these models will be calibrated on what happened in the past."

Dr Ritz was speaking here at the European Geosciences Union General Assembly, where the site for the new drilling operation was formally announced.

It will be on a high ridge about 40km southwest from the Franco-Italian research station known as Dome Concordia. Already, the spot has been dubbed "Little Dome C".

Fourteen institutions from 10 countries will participate in what's referred to as the Beyond-EPICA project.

It will probably take about five years to fully extract the core with at least a further year to examine the ice.

How do ice cores record the climate of the past?

The ice in Antarctica is made up of snows that fell on the continent over millions of years.

As this ice was pressed down, it captured bubbles of air. These little gas pockets are a direct snapshot of the atmosphere.

Scientists can read off the levels of carbon dioxide and other heat-trapping components such as methane, for example.

Analysing the atoms in the water-ice molecules encasing the gases also gives an indication of the temperatures that persisted at the time of precipitation.

Currently, the oldest, continuous ice core ever drilled comes from the previous effort at Dome C called the European Project for Ice Coring in Antarctica (EPICA).

What did this previous ice core reveal?

These markers were seen to move in lock-step. Whenever the Earth went into an ice age and temperatures fell, the concentration of greenhouse gases in the atmosphere would also decline. And when the climate warmed back up again, the CO2 rose in parallel.

These cycles occurred roughly every 100,000 years in the EPICA core - a phasing that is most likely linked to slight shifts in the eccentricity of Earth's orbit (a larger or smaller ellipse) around the Sun.

But it is recognised from an alternative record of past climate, which has been deciphered from ocean sediments, that deeper back in time the ice age cycle was much shorter - at about every 41,000 years.

That is a period probably dominated by the way the Earth tilts back and forth on its axis. But why the switch occurred, no-one is really sure.

What could be the reason for the switch?

The orbital quirks described above change how much of the Sun's energy reaches the Earth, and it accounts for variations in global temperatures in the order of 1.5 degrees Celsius.

But ice ages - from their minimum to their maximum states - involve variations of six degrees. This means there have to have been amplification processes in play.

Differences in the mix and level of greenhouse gases in the atmosphere will no doubt be a part of the story, and the Beyond-EPICA ice core, if it it can reach back to 1.5 million years ago, will expose this particular contribution. There are certain to be additional factors, however.

"In my personal opinion, the best candidate is an internal mechanism in the climate system which has to do with changes in the ice volume on Earth," said Prof Olaf Eisen, the Beyond-EPICA project coordinator from Germany's Alfred-Wegener-Institute.

"If you change ice volume, you also change sea-level and ocean circulation. But something happened in what we call the Middle Pleistocene Transition.

"The drivers behind the MPT are still under debate and touch on the basic understanding of the climate system."

Has Europe chosen the right location?

Many nations have been searching for a place to drill the oldest ice core, including America, Russia, China, Japan and Australia. Europe's is the first project to go into the implementation phase.

The site is helped enormously in terms of logistics by being close to an existing research base, but Little Dome C's selection was only approved after three years of careful survey work.

Teams dragged radar instruments back and forth across the ice to map the layers below. They even sank test boreholes to work out how warm it was likely to be at the base of the ice sheet.

One of the complexities is that heat coming up from the bedrock will melt away the bottom-most and oldest layers of ice. This is a very real danger the deeper the drilling goes, as the coldest temperatures are always found closest to the surface of the ice sheet.

"The core will be in 4m lengths when it comes up," explained Dr Rob Mulvaney from the British Antarctic Survey. "We'll cut it into 1m sections at Little Dome C and then move them to Concordia station itself.

"At the station we'll cut the sections in half, lengthways. One half we'll leave in Antarctica as a long-term archive (we won't have to pay freezer costs!), and the other half will come back to Europe for analysis."