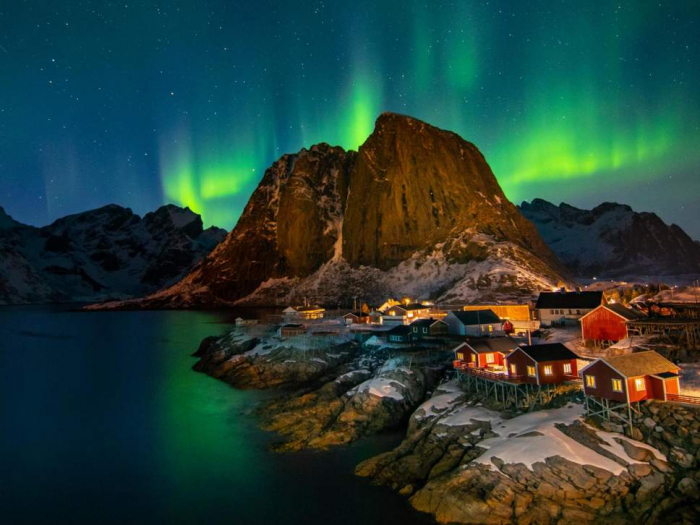 The largest party in Norway’s parliament has delivered a significant blow to the country’s huge oil industry after withdrawing support for explorative drilling off the Lofoten islands in the Arctic, which are considered a natural wonder.

The move, by the opposition Labour party, creates a large parliamentary majority against oil exploration in the sensitive offshore area, illustrating growing opposition to the polluting fossil fuel, which has made the country one of the world’s most affluent.

The country currently pumps out over 1.6 million barrels of oil a day from its offshore operations.

It is thought there are between 1 billion to 3 billion barrels of oil beneath the seabed off the Lofoten archipelago. The area had already been kept off limits for years by Norway’s coalition government through various political deals.

“The whole industry is surprised and disappointed,” Karl Eirik Schjott-Pedersen, head of the Norwegian Oil and Gas Association told Bloomberg. “It does not provide the predictability we depend on.”

Labour’s opposition, announced by its leader, Jonas Gahr Store, exposes a rift in the party as the leadership tries to reflect the population’s rising environmental concerns, while also aiming to support workers’ unions in the oil industry, which have been major backers of the party.

Mr Store said his party would continue to support the oil industry, but has also said he wants oil firms in the country to commit to a deadline for making all operations emissions free.

Norway’s biggest oil union, Industry Energy, which has been a long-time ally of Labour, has attacked the party’s new stance on drilling in Lofoten, which comes less than two years after an internal party compromise on the issue.

“It creates imbalances in the policy discussions for an industry that’s dependent on a long-term perspective and we can’t accept that,” Frode Alfheim, the union’s leader, told the Sydney Morning Herald.

“There’s probably a lot of people in the industry who are wondering what Labour actually stands for.”

The move comes days after Norway’s government gave the go-ahead on Friday for its $1trillion (£760bn) oil fund – the world’s largest sovereign wealth fund – to invest in renewable energy projects not listed on stock markets.

Billions are expected to be spent on wind and solar power projects.

It is the latest indication that wealth accumulated through fossil fuels is being redirected towards future profits in renewable energy. Greater numbers of industries and countries have begun fossil fuel divestment strategies, citing future risks to their business and economic models.

Last month Norway’s oil fund said it would no longer invest in 134 companies which explore for oil and gas, but would retain stakes in large oil firms including BP and Shell, which have renewable energy divisions.