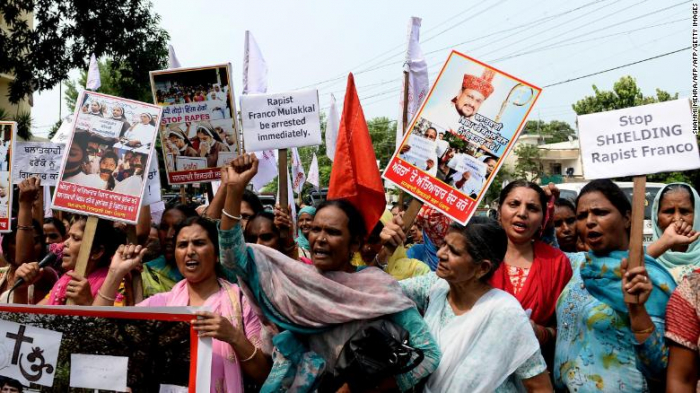 Police in India have charged a Catholic bishop with raping a nun, following months of protests and allegations of a coverup, CNN reported.

Bishop Franco Mulakkal is accused of raping a nun multiple times between 2014 and 2016 at a church guest house in Kerala, in the country's southwest.

The police official who led the investigation, K. Subash, told CNN the charge sheet against Mulakkal had statements from 83 witnesses, including a cardinal, three bishops, 11 priests and 25 nuns.

Mulakkal was arrested in September following sustained protests by nuns in the area accusing police of a coverup. He was released on bail about a month after arrest.

The 44-year-old nun, who has not been named, first filed a police report in June, accusing Mulakkal of raping her 13 times between 2014 and 2016. She alleged the abuse occurred while Mulakkal was staying in Kerala in a guest house belonging to the St. Francis Mission Home.

Mulakkal is the bishop of Jalandhar, a city in India's northern Punjab state. His diocese said the bishop was a frequent visitor to Kerala for church-related events.

Christianity is a minority religion in India, practiced by 2.3% of the population, according to the most recent census data, but Kerala is home to a sizable Christian community that dates back hundreds of years. The majority are Catholics.

According to recent government figures, the southern state is home to more than 6 million Christians, or 19% of the population. Communities there draw their heritage from Thomas the Apostle, who is traditionally believed to have traveled to India to preach the gospel in the first century.