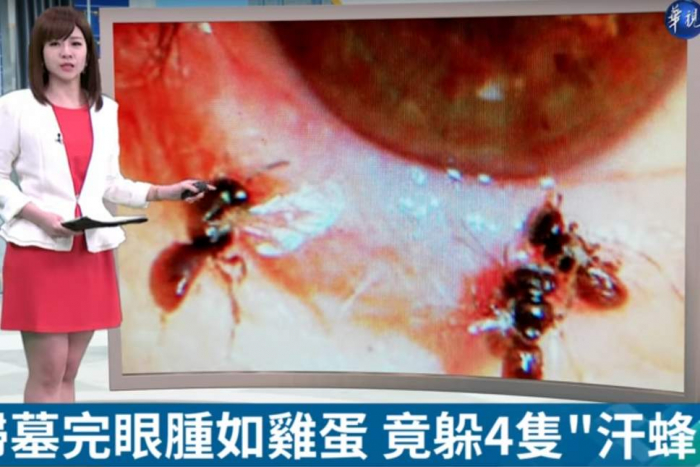 A Taiwanese woman who suffered what she believed to be a sudden and severe eye infection discovered she was unwittingly hosting four bees which had flown into her eye and were living beneath her eyelid and feeding on the fluid from her tear ducts.

The 29-year-old woman, identified only by her surname, He, was treated for unbearable eye pain at Fooyin University Hospital last week.

Doctors treating her were surprised to find four bees beneath her swollen eyelid, and removed them in what has been described as a “world first”.

The hospital’s head of ophthalmology, Dr Hung Chi-ting, told CTS News at a press conference: “I saw something that looked like insect legs, so I pulled them out under a microscope slowly, and one at a time without damaging their bodies.”

Ms He said she had been pulling out weeds while tending a relative’s grave when she felt something fly into her eye.

She first believed it to be soil or grit, and rinsed her eye with water. However, the pain only grew worse, and by evening her eye was badly swollen and streaming with tears.

Dr Hung had first suspected inflammation of the cornea, but upon inspection under a microscope, saw the insects’ wriggling legs.

The diminutive insects, known as “sweat bees” due to their predilection for human perspiration, were miraculously pulled from Ms He’s eyes alive.

The doctor said it was fortunate Ms He had not rubbed her eyes as it could have squashed and killed the bees, and this would likely have led to more serious injury and could have caused blindness.

The species, Halictidae, are common across the world, and got their name from their attraction to the salts in human sweat. Reputedly non-aggressive, on the rare occasions their sting is used the discomfort is said to be mild.