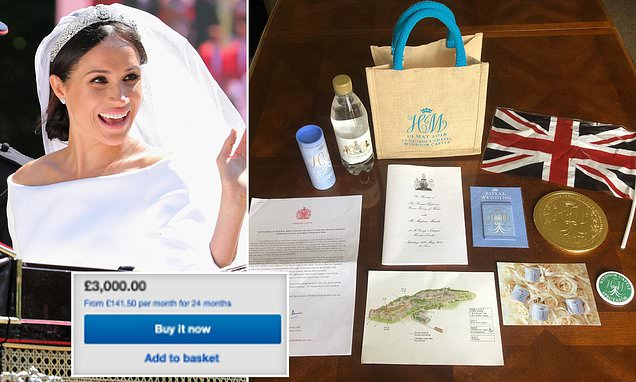 Non VIP guests at Prince Harry and Meghan Markle's wedding were given gift bags packed full of royal treats. Now, almost a year later, some are trying to sell them on eBay.

Prince Harry and Meghan Markle's wedding guests are still cashing in on gift bags from their big day in the run up to the royal couple becoming parents.

Three of the highly sought-after mementos have gone on eBay as wellwishers count down the days until the arrival of the royal baby.

Non-VIP guests were slammed last May after putting the hessian bags and the commemorative contents on sale within days of their Windsor Castle wedding.

Some of the current listings are asking for thousands of pounds, including one which is listed online for £3,000.

The sets include an order of service, a wristband, a chocolate coin, bottle of water, shortbread and a magnet.

Days after the wedding, the goody bags listed online for £21,000. But now more have appeared on the auction website. One from a seller in Epsom, Surrey, is on sale for £3,000.

The listing reads: 'This very special and unique bag with contents could be yours so grab your opportunity to own your very own piece of Royal history.'

Last May, 1,200 members of the public were invited to spend the day outside St George's Chapel in May last year to celebrate the royal wedding.

The bags were given as a complimentary gift to 'Community Champions' and their guests as they arrived at Windsor.

The 1,200 Community Champion guests arrived at 9am to see 600 VIPs including the Queen, Prince Philip and Prince Charles as well as the Clooneys, the Beckhams, Elton John and Oprah Winfrey turn up for the A-list wedding of the decade.

And as 120,000 well-wishers fought for space outside the castle, these privileged 1,200 were able to get great views of the newlyweds as they kissed outside the chapel and paraded past in the royal Ascot Landau carriage.

But within hours of the event finishing, dozens of their free hessian gift bags were being auctioned off to the highest bidder.

Now it seems others are trying to take advantage of the excited buzz around the birth of the royal baby, and are looking to sell their gift bags online.

The third, in Purley, Surrey, is on for just £150. Days after the wedding some 25 people listed their bags online, with one seemingly reaching £21,000 in bids.