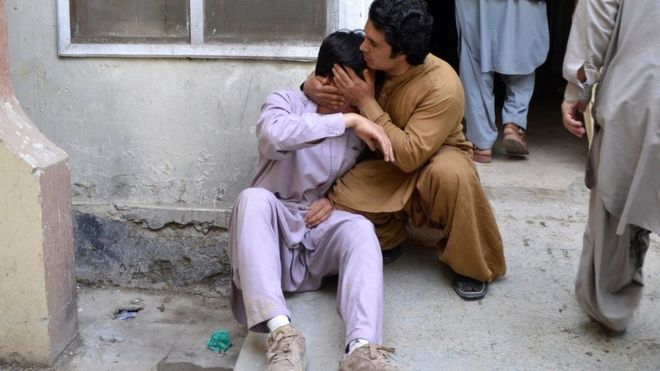 Dozens of men, women and children from Pakistan's minority Hazara community have held a protest in the city of Quetta demanding better security.

The sit-in started hours after 24 people were killed and dozens injured in a bomb blast at a vegetable market in the south-western city.

Many victims were from the Hazara community, who are mainly Shia Muslims.

The community has been frequently targeted by extremists from Pakistan's Sunni Muslim majority.

Both the Pakistani Taliban and the Sunni militant group Islamic State (IS) said they had carried out the attack.

Quetta, a city in Baluchistan province that is home to more than half a million Shia Hazara, has witnessed the majority of IS attacks in Pakistan.

A man disguised as a labourer detonated a bomb inside the Hazar Ganji, a fruit and vegetable market on the outskirts of Quetta, city police chief Abdul Razzaq Cheema was quoted as saying by Reuters news agency.

Those guilty were enemies of humanity, he said.

"Targeted for their religion by sectarian armed groups, they have suffered many such tragedies over several years. Each time, there are promises that more will be done to protect them, and each time those promises have failed to materialise."