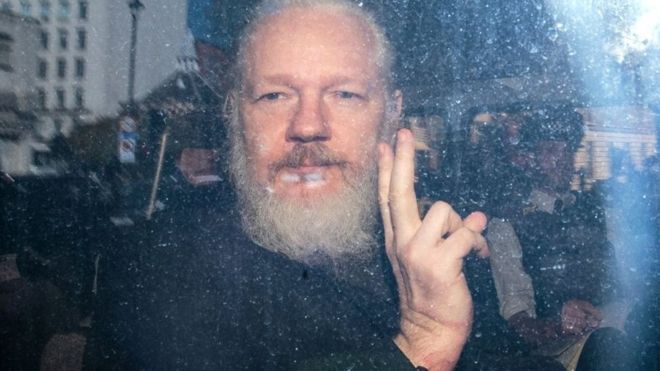 Julian Assange used the Ecuadorean embassy in London as a "centre for spying", the country's leader has said.

Lenin Moreno also said no other nation had influenced the decision to revoke the WikiLeaks founder's asylum, which he said followed violations by Assange.

Speaking to the Guardian, President Moreno claimed Ecuador's old government provided facilities within the embassy "to interfere" with other states.

President Moreno - who came to power in 2017 - said of the decision to end Assange's seven-year stay in the embassy: "Any attempt to destabilise is a reprehensible act for Ecuador, because we are a sovereign nation and respectful of the politics of each country."

He added: "We can not allow our house, the house that opened its doors, to become a centre for spying."

Assange's lawyer, Jennifer Robinson, disputed the claims when she appeared on Sky's Sophy Ridge On Sunday.

"I think the first thing to say is Ecuador has been making some pretty outrageous allegations over the past few days to justify what was an unlawful and extraordinary act in allowing British police to come inside an embassy," she said.

She added that Assange's fears of a US extradition threat were proved correct this week after allegations were made that he conspired to hack into a classified Pentagon computer.

Assange, 47, faces up to 12 months in prison after being found guilty of breaching his bail conditions when he entered the Ecuadorean embassy in 2012.

He made the move after losing his battle against extradition to Sweden where he faced allegations including rape.

Assange is now expected to fight extradition to the US over an allegation that he conspired with former army intelligence analyst Chelsea Manning to break into a classified government computer.