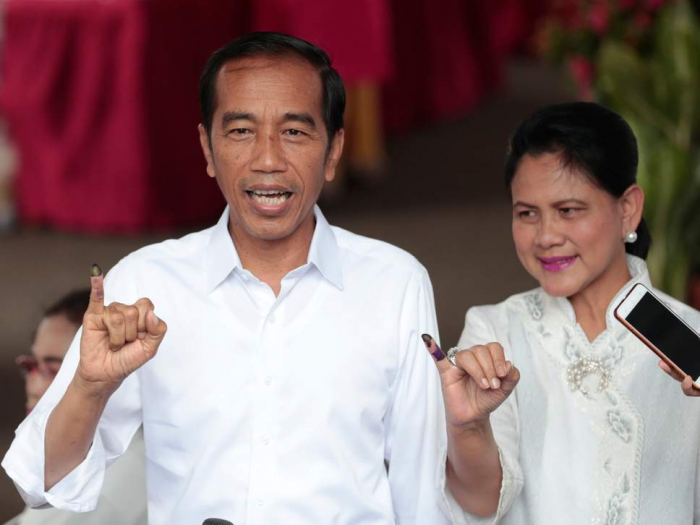 Incumbent president Joko Widodo is on course for victory in Indonesia's election, the first unofficial results show, with one count putting him 13 percentage points ahead of his rival.

Pollster CSIS gave Mr Jokowi, as he is universally known, 56.7 per cent with more than half of the vote counted, while the former general Prabowo Subianto lagged behind on 43.3 per cent.

Another count, by the Kompas newspaper, gave Mr Jokowi 55.45 per cent to Mr Prabowo's 44.55 per cent. Indonesia's election body authorises these "quick counts" in lieu of exit polls, with official results taking many days to be confirmed.

Produced by reputable news outlets and survey organisations, the early counts have proved reliable in past elections. Another two organisations also had Mr Jokowi on between 54 and 56 per cent.

Indonesia voted on Wednesday in one of the most logistically challenging single-day elections ever held. More than 192 million people were eligible to cast their ballots and asked to choose both a president as head of the government and representatives for two national assemblies.

The crucial presidential race pitted Mr Jokowi, a former furniture salesman whose victory in 2014 was seen as finally breaking the hold on power of Indonesia’s deeply entrenched military and political elites, against Mr Prabowo, a self-styled strongman who cosied up to the country's powerful hardline Islamist factions in a bid to avoid a repeat of his 2014 failure.

Asked to comment on the "quick count" results, Prabowo campaign spokesman Dahnil Anzar Simanjuntak said that numbers based on 50 per cent of votes was not enough.

A senior government official close to the president said before the election that a win for Widodo with 52-55 percent of the vote would be a "sweet spot", and enough of a mandate to press on with, and even accelerate, reforms.

The winner may be known by late on Wednesday, though official results will not come until May. Any disputes can be taken to the Constitutional Court where a nine-judge panel will have 14 days to rule on them.