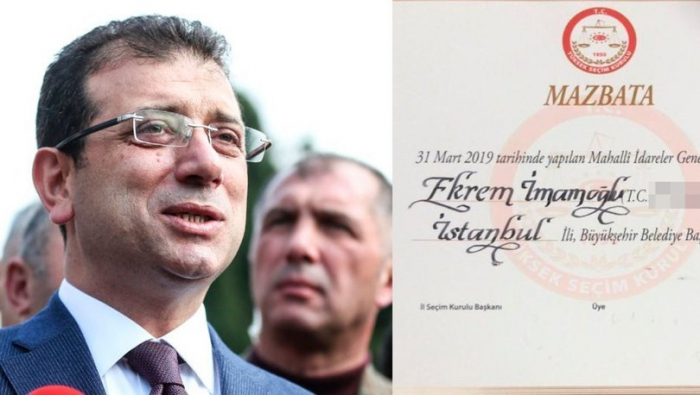 Turkey's Supreme Electoral Council (YSK) will issue a mandate to the candidate from the opposition Republican People’s Party, Ekrem Imamoglu, as the head of the Istanbul municipality, AzVision.az reports via Turkish media.

Reports earlier noted that Imamoglu would receive a mandate to be the head of the Istanbul municipality on April 17.

Earlier, the opposition Republican People’s Party (CHP) of Turkey had appealed to the YSK demanding to issue a mandate to Ekrem Imamoglu to head the Istanbul municipality.

The Turkish ruling Justice and Development Party has recently officially appealed to the YSK to hold the repeat elections in Istanbul.

Earlier, Turkish President Recep Tayyip Erdogan said that the results of the municipal elections in Istanbul may be annulled.

Meanwhile, Yavuz said that the ruling party demands to hold the repeat municipal elections in Istanbul.

He added that the ruling party has all the evidence of falsification of the election results.

“The ruling party will present all the facts of falsification of the election results in Istanbul soon,” he said.

He noted that the ruling Justice and Development Party (AKP) appealed to the Turkish Supreme Electoral Council (YSK) to identify the perpetrators.

Meanwhile, the Justice and Development Party presented facts of falsification of 11,000 votes in Istanbul in favour of the candidate of the opposition Republican People’s Party (CHP) Ekrem Imamoglu.

The coalition of the ruling party and the Nationalist Movement Party gained 51.67 percent of votes in the municipal elections throughout the country.