WW2 bomb blown up in Germany after evacuation 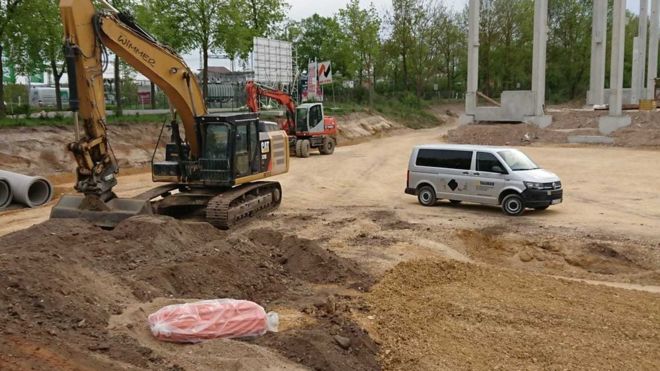 It was discovered in the southern city of Regensburg during construction work.

The bomb could not be transported or defused, experts found. So they instead evacuated some 4,500 people in a 1.5km (one mile) radius.

Despite the planned explosion, nearby buildings were damaged in the blast, their windows shattering.

Unexploded bombs from the war are not uncommon in Germany, which was heavily bombed by Britain and, later, the US.

Regional newspaper Mittelbayerische Zeitung reported that the Regensburg bomb was equipped with a particularly complicated detonator.

It also presented a genuine threat, investigators decided - rather than being considered a dud - and had to be detonated on the spot as soon as possible.

A bomb disposal robot was used to place an explosive charge next to the bomb, it reported. The resulting explosion, shortly before 05:00 local time (03:00 GMT) , could be heard kilometres away.

Police then began a safety check of the area before allowing residents to return to their homes. A full inspection of the damage caused will be carried out on Wednesday.

The bomb has not been identified - but British and US forces bombed the city multiple times during World War Two, dropping hundreds of bombs, many of which did not explode.

A US-made bomb was discovered in the city in January, which was defused after a lengthy operation that resulted in the evacuation of more than 2,000 people.

In June 2017, a similar discovery made headlines when more than 100 prisoners had to be evacuated when a bomb was found near a jail - along with 1,500 residents.

Across Germany, evacuations for old bombs sometimes involve entire populations. About 18,500 people were evacuated from Ludwigshafen in August last year,while Frankfurt evacuated some 70,000 over the threat from a 1.4 tonne British "blockbuster" bomb in 2017.