US's Venezuela sanctions 'responsible for tens of thousands of deaths' 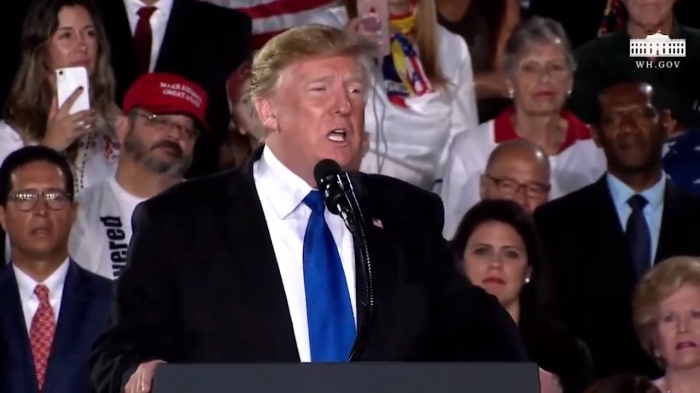 As many as 40,000 people may have died in Venezuela as a result of US sanctions that made it harder for ordinary citizens to access food, medicine and medical equipment, a new report has claimed.

The report, published by the Centre for Economic and Policy Research (CEPR) a progressive, Washington DC-based think tank, says those deaths took place following the imposition of sanctions in the summer of 2017. It said the situation had probably worsened since the imposition earlier this year, of tougher sanctions targetting Venezuela’s vital oil industry, as part of the Trump administration’s effort to oust president Nicolas Maduro.

“The sanctions are depriving Venezuelans of lifesaving medicines, medical equipment, food, and other essential imports,” says the report, co-authored by Jeffrey Sachs, an award-winning economist based at Columbia University, and Mark Weisbrot. “This is illegal under US and international law, and treaties that the US has signed. Congress should move to stop it.”

The report’s authors based their claims on estimates of excess mortalities contained within Venezuela’s National Survey on Living Conditions, known as Encovi. The annual survey of living conditions is administered by three Venezuelan universities. It found there was a 31 per cent increase in general mortality from 2017 to 2018 – representing more than 40,000 deaths.

Mr Weisbrot, a cofounder of the CEPR, told The Independent the authors could not prove those excess deaths were the result of sanctions, but said the increase ran parallel to the imposition of the measures and an attendant fall in oil production, which has for decades been a mainstay of the Venezuelan economy.

“You cannot prove a counter factual,” said Mr Weisbrot. “But [the excess deaths do] not have another obvious explanation.”

The August 2017 sanctions stopped the Venezuelan government from borrowing in US financial markets, and preventing it restructuring its foreign debt, the report says.

“Following the August 2017 executive order, oil production crashed, falling at more than three times the rate of the previous twenty months,” it adds. “This would be expected from the loss of credit and therefore the ability to cover maintenance and operations and carry out new investments necessary to maintain production levels. This acceleration in the rate of decline of oil production would imply a loss of $6bn in oil revenue over the ensuing year.”

The report claims that since the imposition of new sanctions on the oil industry, things have become more difficult for ordinary citizens.

The US has for several decades had a tense relationship with Venezuela, despite it historically being a major supplier of crude oil. That relationship has become increasingly fraught since the election of Donald Trump.

Earlier this year, Mr Trump recognised opposition leader Juan Guaido as the country’s president and supported him as he sought to establish a parallel government.

The US has admitted the sanctions are aimed at dislodging Mr Maduro, who was sworn in for a second term as president, following an election last year that was not recognised by many western nations, although said to fair by a number of independent observers.

Critics of the Venezuelan leader say he has overseen a collapse in the economy, and watched as more than three million people have fled to escape food shortages and chaos. His government has been accused of becoming increasingly autocratic, and insisting on political loyalty in exchange for subsidised food and other essentials.

Addressing a rally in Miami in February, Mr Trump urged senior members of the Venezuelan military to defect. “Maduro is not a Venezuelan patriot, he is a Cuban puppet,” he said.

This is not the first time that concerns have been raised about the humanitarian impact of US sanctions. In January, UN special rapporteur Idriss Jazairy said sanctions  “which can lead to starvation and medical shortages are not the answer to the crisis in Venezuela”.

“Coercion, whether military or economic, must never be used to seek a change in government in a sovereign state,” he said. “The use of sanctions by outside powers to overthrow an elected government is in violation of all norms of international law.”

Meanwhile former special rapporteur Alfred de Zayas, who finished his term at the UN in March, accused the US of engaging in “economic warfare” against Venezuela which he said was hurting the economy and killing Venezuelans.

Asked to comment on the report’s claims that Washington’s sanctions had killed tens of thousands of people, the US state department said “as the writers themselves concede, the report is based on speculation and conjecture”.

“The economic situation in Venezuela has been deteriorating for decades, as Venezuelans themselves will confirm, thanks to Maduro’s ineptitude and economic mismanagement. Nicolas Maduro and his corrupt cronies are solely responsible for the suffering of the Venezuelan people and the flight of over 3 million Venezuelans into other countries and countless deaths,” a spokesperson added.

“Our sanctions were a response to their corruption, mismanagement, and abuse, and are assisting in choking the Maduro regime of the funds it uses to repress the people of Venezuela.”

The CEPR report says: “[The US sanctions] would fit the definition of collective punishment of the civilian population as described in both the Geneva and Hague international conventions, to which the US is a signatory. They are also illegal under international law.”