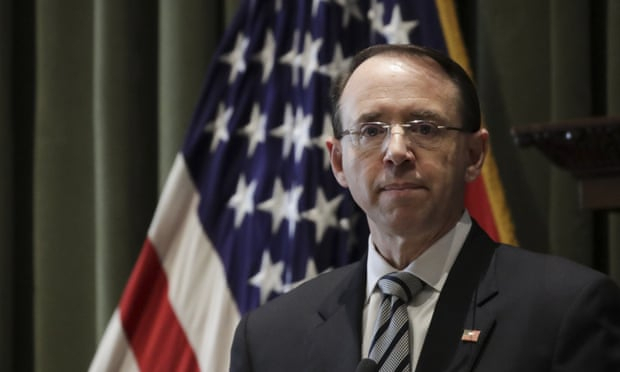 The deputy attorney general, Rod Rosenstein, has resigned, after a fraught two-year relationship with a president who resented his decision to appoint a special counsel to investigate possible ties between Donald Trump’s presidential campaign and Russia, the Guardian reports.

“I am grateful to you for the opportunity to serve; for the courtesy and humor you often display in our personal conversations; and for the goals you set in your inaugural address: patriotism, unity, safety, education and prosperity,” Rosenstein said in a letter delivered to the White House.

His departure was expected – Rosenstein had said he intended to step down after the conclusion of the Mueller first investigation. The man nominated to succeed him, Jeffrey Rosen, is currently awaiting confirmation by the Senate.

Rosenstein, 54, who worked at the justice department for nearly 30 years, came under an unusually bright spotlight because of his role initiating the special counsel Robert Mueller’s investigation into Russian interference in the US election. He assumed oversight of the investigation after the former attorney general Jeff Sessions recused himself following reports that he had not disclosed meetings with Russian officials during his Senate confirmation hearing. After Trump fired the former FBI director James Comey, Rosenstein appointed Mueller as special counsel to continue the investigation.

Rosenstein had long been a target of Trump and the president’s allies, who attacked the investigation as a “witch hunt” working within a department rife with anti-Trump bias. At one point, House conservatives had drafted articles of impeachment against Rosenstein while Trump lashed out at him on Twitter on multiple occasions.

The deputy attorney general’s tumultuous relationship with Trump frayed further after the New York Times reported that he had discussed the possibility of removing Trump from office under the 25th amendment and also of wearing a “wire” to secretly record the president. Rosenstein has called the report “inaccurate” and said he never authorized recording Trump.

In the ensuing fallout, Rosenstein was summoned to the White House for a meeting with Trump’s then chief of staff, John Kelly.

“I can go. I’m ready to go,” Rosenstein reportedly told Kelly, according to a report last week in the Washington Post. “I can resign. But I don’t want to go out with a tweet.”

In the letter, Rosenstein defended the decisions he made while in office while also praising the integrity and independence of the justice department.

“We enforce the law without fear or favor because credible evidence is not partisan, and truth is not determined by opinion polls,” Rosenstein said. “We ignore fleeting distractions and focus our attention on the things that matter, because a republic that endures is not governed by the news cycle.”

In a statement, the attorney general William Barr, who took the reins at the justice department in February, praised Rosenstein’s long career with the department.

“His devotion to the department and its professionals is unparalleled,” Barr said. “Over the course of his distinguished government career, he has navigated many challenging situations with strength, grace, and good humor. Rod has been an invaluable partner to me during my return to the department, and I have relied heavily on his leadership and judgment over the past several months.”

The Mueller report, a redacted version of which was released to the publicearlier this month, found insufficient evidence to prove that Trump and his campaign conspired with Russia to interfere in the 2016 presidential election though it didn’t conclude whether the president obstructed justice. In a summary of the report delivered to Congress, Barr and Rosenstein concluded that Trump hadn’t committed a crime.