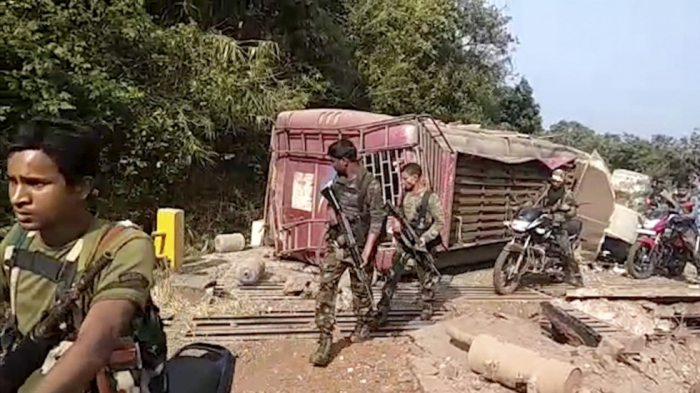 Suspected leftist insurgents killed at least 15 police commandos and a civilian driver in a landmine attack on two security vehicles on Wednesday in the western state of Maharashtra, police said, as the state celebrated its foundation day.

"Maoists attacked a team of commandos traveling in a private vehicle to inspect an earlier attack. So far 16 men have died," an official at police headquarters in the western state of Maharashtra told AFP.

"More teams have been sent to site for rescue and combat operations," said the officer, who did not want to give his name.

India is holding elections and attacks by Maoist rebels, who are active in several states, often spike as the country goes to the polls.

A second police official put the death toll in the latest incident in the Gadchiroli region of Maharashtra at 15.

"Maoists torched over 30 vehicles in Gadchiroli today at 12:30 p.m. (0700 GMT). In another blast, 15 security officers were killed and rescue operations are ongoing to ascertain the damage," Gadchiroli police official Prashant Dute told AFP.

Indian forces have been fighting Maoists rebels for decades in several areas, in an insurgency that has killed tens of thousands.

The Maoists are believed to be present in at least 20 Indian states but are most active in Chhattisgarh, Odisha, Bihar, Jharkhand -- and Maharashtra.

India's nationwide election began on April 11 and runs until May 19.

One constable and an assistant constable died at the scene and the villager, shot in the chest, was taken by local residents for treatment, PTI reported.

"Strongly condemn the despicable attack on our security personnel in Gadchiroli, Maharashtra. I salute all the brave personnel," Modi tweeted.

"Their sacrifices will never be forgotten. My thoughts & solidarity are with the bereaved families. The perpetrators of such violence will not be spared," he added.

"Anguished to know that our 16 police personnel from Gadchiroli C-60 force got martyred in a cowardly attack by naxals (Maoists) today. My thoughts and prayers are with the martyrs' families," Fadnavis said.

Home Minister Rajnath Singh called the attack "an act of cowardice and desperation."

"We are extremely proud of the valor of our police personnel," he said. "Their supreme sacrifice while serving the nation will not go in vain."