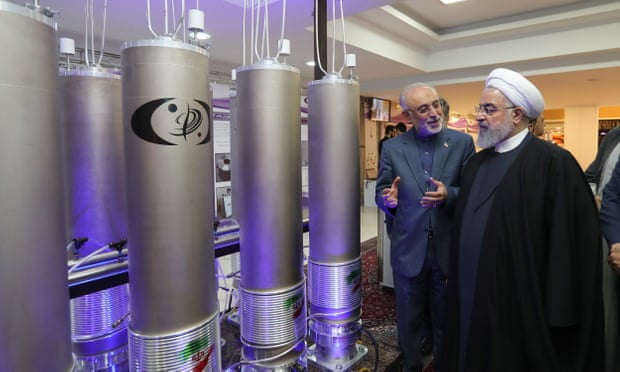 The European Union and the foreign ministers of Germany, France and Britain have said they are still committed to the Iran nuclear deal but would not accept ultimatums after Iran announced it was scaling back curbs to its nuclear programme.

“We reject any ultimatums and we will assess Iran’s compliance on the basis of Iran’s performance regarding its nuclear-related commitments under the JCPOA [joint comprehensive plan of action] and the NPT [Non-Proliferation Treaty],” they said.

The EU and German, French and British foreign ministers said they regretted the re-imposition of sanctions by the US after it withdrew from the nuclear deal, and added they remained committed to preserving and fully implementing the Iran nuclear deal.

The Trump administration pulled the US out of the 2015 deal a year ago, saying it did nothing to stop Iran from developing missiles or destabilising the Middle East. The European ministers insisted the pact was an important pillar of regional and global security and was never meant to address those other issues.

The Iranian president, Hassan Rouhani, said in a televised address on Wednesday that signatories to the deal had 60 days to come up with a plan to shield his country, which has been labouring under economic hardship from the sanctions imposed by the US president, Donald Trump.

The EU powers said they remained “determined to continue pursuing efforts to enable the continuation of legitimate trade with Iran”.

The Europeans have set up a complicated barter-type system to skirt direct financial transactions with Iran and so evade possible US sanctions. The workaround, dubbed Instex, is not yet operational as Iran has not completed its part of the scheme.

The bloc said it planned to push ahead with “the operationalisation of the special purpose vehicle ‘Instex’”.

It has also introduced a “blocking statute”, protecting European companies from the effects of US sanctions, but many international corporations do more business in the US than in Iran and have already severed ties there rather than risk running afoul of Washington.

The EU powers, in a message implicitly directed at Trump’s administration, said: “We call on countries not party to the [deal] to refrain from taking any actions that impede the remaining parties’ ability to fully perform their commitments.”

Despite the heated rhetoric, the Europeans insist that only the International Atomic Energy Agency could judge whether Iran remained in compliance with the nuclear agreement. More than a dozen reports have shown that Tehran was respecting it so far. A new report is due at the end of May.