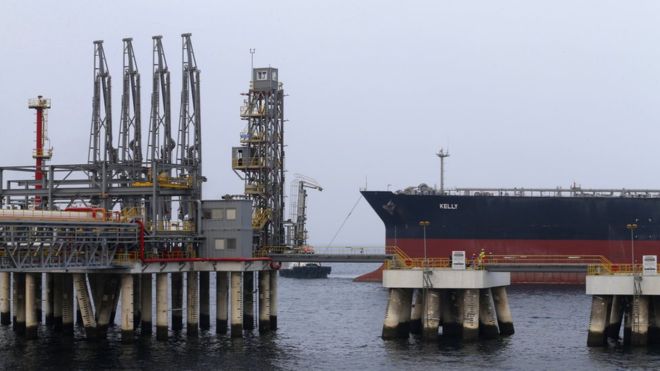 The incident near Fujairah port, in the Gulf just outside the Strait of Hormuz, caused "significant damage" to the ships, according to Khalid al-Falih.

The UAE said four ships were targeted, but that there were no casualties.

Iran, which borders the strait, called the incident "worrisome and dreadful" and called for a full investigation.

Tensions are high in the region, through which about a fifth of oil that is consumed globally passes.

The US has deployed warships there in recent days to counter what it called "clear indications" of threats from Iran to its forces and maritime traffic in the region. Iran dismissed that allegation as nonsense.

Last month, Iran threatened to "close" the Strait of Hormuz if it was prevented from using the waterway following a US decision to end exemptions from sanctions for major Iranian oil importers.

What do we know about the incident?

No specific details have been released about the alleged incident, which is said to have taken place at about 06:00 (02:00 GMT) on Sunday within the UAE's territorial waters in the Gulf of Oman, east of the emirate of Fujairah.

The UAE foreign ministry said on Sunday evening that four unidentified commercial vessels had been "subjected to sabotage operations", but that no casualties or spillages were reported.

UAE authorities had taken all necessary measures and were investigating the incident, it added.

The ministry also denied as "baseless and unfounded" media reports of fires and explosions at Fujairah port, and insisted operations at the facility were normal.

On Monday morning, the official Saudi Press Agency quoted Mr Falih as saying two Saudi oil tankers had been among the ships targeted.

"One of the two vessels was on its way to be loaded with Saudi crude oil from the port of Ras Tanura, to be delivered to Saudi Aramco's customers in the United States," he added.

Saudi-based Al Arabiya TV aired what it said were the first images of the damaged ships on Monday. It reported that the other two vessels targeted were from Norway and the UAE.

Separately, a ship management company said a Norwegian-registered tanker had been damaged by an unknown object near Fujairah.

"The crew were unharmed but there was a hole in the hull area," Thome Ship Management said in a statement. "The ship is not in any danger of sinking."

Intertanko, an association of independent tanker owners and operators, said it had seen pictures showing that "at least two ships have holes in their sides due to the impact of a weapon", Reuters news agency reported.

Who is to blame?

Saudi Arabia and the UAE did not accuse any groups or countries.

However, Mr Falih said it was intended "to undermine the freedom of maritime navigation, and the security of oil supplies to consumers all over the world".

"The international community has a joint responsibility to protect the safety of maritime navigation and the security of oil tankers," he added.

Iranian foreign ministry spokesman Abbas Mousavi was cited by the semi-official Isna news agency as saying "such incidents have negative impact on maritime transportation security". He asked for regional countries to be "vigilant against destabilising plots of foreign agents".