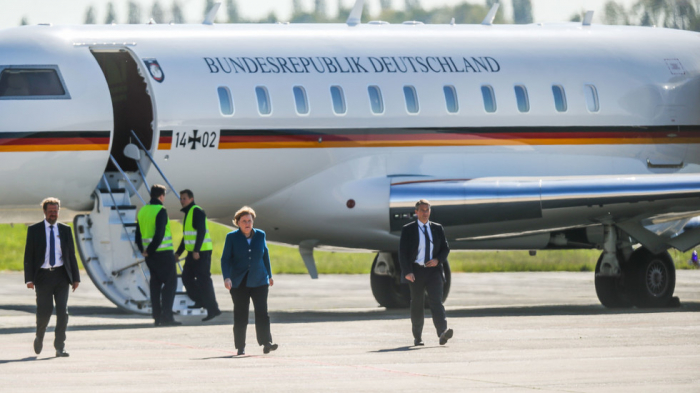 A van grazed German Chancellor Angela Merkel’s parked government jet, damaging the plane’s hull. Merkel was not on board at the time, but the incident is the latest in a series involving German government aircraft.

The van, a Renault Trafic, rolled into the Bombardier Global 5000 jet at Dortmund airport on Monday afternoon. Three crew members on board were unharmed, and the extent of the damage is unclear.

Merkel herself was in Dortmund for a series of meetings and will be flown back to Berlin on another plane, the Luftwaffe confirmed on Monday. A government source told German tabloid Bild, perhaps jokingly, that the van’s driver had been so fascinated with seeing Merkel’s jet that they got out for a closer look and forgot to apply the handbrake, causing the crash.

An unremarkable incident, save for the fact that the 12 aircraft of the German government fleet have already been involved in a shocking six technical incidents so far this year.

A Luftwaffe Global 5000 was forced to make an emergency landing at Berlin’s Schoenefeld Airport last month, scraping the ground with both wings and injuring the crew. The government’s flagship Airbus A340 – the Konrad Adenauer – suffered two technical mishaps in April too, once in Cologne and once in New York, with Foreign Minister Heiko Maas on board.

Maas was stuck in Mali in February after a government A319 suffered a problem with its landing gear, while Development Minister Gerd Mueller was delayed in Zambia and Malawi after his Bombardier Global 5000 suffered engine trouble on two separate occasions in January.

Mueller, who had to cancel a trip to Namibia as a result of the delays, went on to say that the incidents were an embarrassment for Germany’s reputation as a technological powerhouse, and damaged the ‘Made in Germany’ brand.

Perhaps most embarassingly, Merkel missed the opening of last November's G20 summit in Buenos Aires, after the Konrad Adenauer suffered a technical fault one hour into the 15-hour flight and made an emergency landing at Cologne. Merkel herself was forced to catch a commercial flight to Argentina the following day.