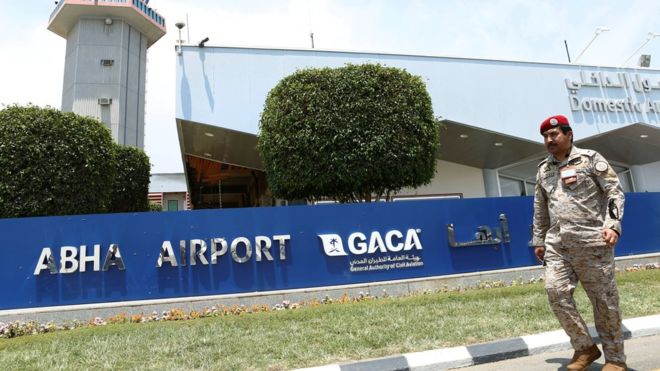 The drones targeted Abha airport and the nearby city Khamis Mushait, Saudi officials said in a statement.

The officials did not report any casualties in the latest strike, and said the airport was running normally without any disruption to flights.

Yemen has faced consistent bombing by coalition forces since March 2015.

The country has been devastated by the conflict, which escalated when the rebels seized control of much of the west of the country and forced President Abdrabbuh Mansour Hadi to flee abroad.

Alarmed by the rise of a group they believed to be backed militarily by regional Shia power Iran, Saudi Arabia and eight other mostly Sunni Arab states began an air campaign aimed at restoring Mr Hadi's government.

After Wednesday's assault, Houthi-run channel Al Masirah TV reported that they had launched a cruise missile at the airport - a claim that Saudi officials said they were investigating.

Saudi Deputy Defence Minister Prince Khaled bin Salman later said that attack and others were "ordered by the regime in Tehran". Iran denied it was involved, as did the Houthis.

In response, the coalition launched air strikes on the rebel-held Yemeni capital, Sanaa, which reportedly killed at least six people, including four children.

The UN says the fighting in Yemen has left at least 7,000 civilians dead and 11,000 injured. About 65% of the deaths have been attributed to coalition air strikes.

In December, both sides agreed to a local ceasefire and withdrawal of forces around the key Red Sea port city of Hudaydah, through which most of Yemen's aid is delivered. But elsewhere the violence has continued unabated.