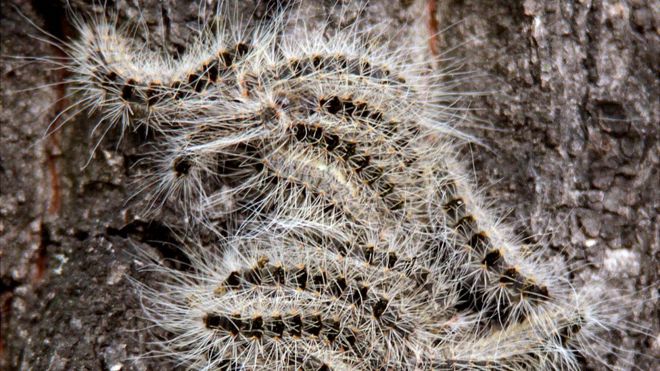 In Louvain, Belgium, firefighters had to destroy nests of the invasive species before a rock concert.

The caterpillars turn into pupae, then moths in late July, and the threat diminishes.

Germany's western Ruhr region is densely populated and among the worst affected by the caterpillars.

Some schools and parks have been closed to allow specialists to attack the nests in oak trees.

The caterpillars - measuring 2-3cm (about one inch) - march in long processions to the treetops at night, and can wreak havoc in oak trees, as they feast on the young leaves.

One mature caterpillar has up to 700,000 hairs, which can be spread by the wind.

The Fredenbaumpark in Dortmund was closed for three weeks, as nearly 500 trees were found to be infested there, broadcaster Deutschlandfunk reported.

"The oak processionary infestation this year is very intensive - much more than last year," said the park's manager Frank Dartsch.

Special teams there and elsewhere have donned protective gear and used firefighters' lifts to reach the treetops, where they have attacked the caterpillar nests with blowtorches or big vacuum cleaners.

In the Netherlands, the infestations have also increased compared with 2018, with the oak-rich provinces of Noord-Brabant, Drenthe and Overijssel especially affected.

A video of an elderly woman attacking the caterpillars with a heat gun in the city of Enschede has gone viral, the nltimes.nl website reports.

The caterpillars were a problem in parts of England last year.

What is the risk?

The tiny hairs are carried in the wind and contain a toxin, which can cause rashes, eye irritation, coughing or even an allergic reaction. The caterpillar nests are too dangerous to touch.

The toxin is thaumetopoein, a protein, and hard to counteract as the hairs have hooks that grip the skin. The anti-inflammatory cortisone can provide relief.

Dogs are also vulnerable, as they like to sniff around trees in parks.

What can be done about them?

The caterpillars have some natural predators, including parasites and Calosoma beetles. Few birds, apart from cuckoos and orioles, will touch them.

In some parts of Germany eco-friendly pesticides have been sprayed on oak trees.

Municipal websites in Germany and elsewhere have some advice:

- Clothes and personal effects contaminated with hairs should be thoroughly washed

- Wash yourself thoroughly, including your hair, if you suspect contamination

- Get medical help if you have skin or respiratory irritation

- Visible hairs can be removed with strips of adhesive tape