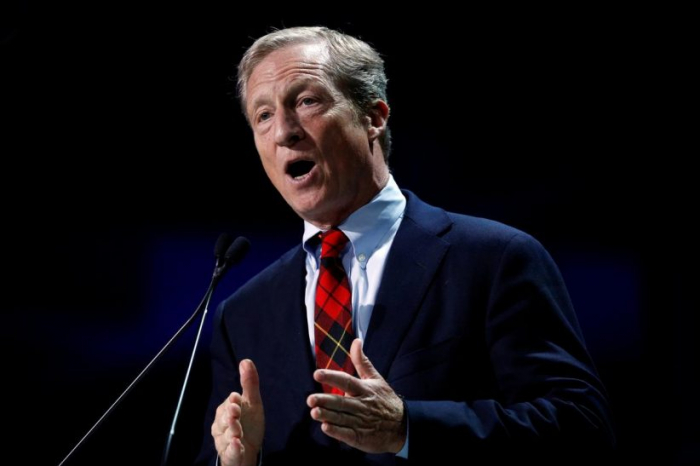 Billionaire Tom Steyer, who has pushed Democrats to impeach President Donald Trump and previously flirted with running for the White House, said on Tuesday he will now seek the Democratic nomination.

Steyer, 62, painted himself as a political outsider and blasted corporate money in U.S. politics, in a statement and an online video released on Tuesday. He said other Democrats had good ideas but “we won’t be able to get any of those done until we end the hostile corporate takeover of our democracy.”

His candidacy also comes with significant challenges, such as cobbling together a staff from a smaller pool of strategists and meeting the more rigid requirements for subsequent debates in September.

Steyer amassed a fortune estimated by Forbes magazine at $1.6 billion after founding investment firm Farallon Capital Management in the mid-1980s and serving as a partner at San Francisco private equity firm Hellman & Friedman.

Steyer had said in January he was passing on a 2020 run to focus on efforts to impeach Trump and get Democrats elected to the U.S. Congress.

Steyer has been a force in Democratic fundraising over the past decade. NextGen America, a political nonprofit he formed in 2013, has poured millions into elections, focusing on climate change, immigration and access to affordable healthcare, among other issues.

Steyer said he spent $120 million on the 2018 elections, investing heavily in youth turnout, which he called an untapped source of Democratic support. He also spent more than $90 million during the 2016 elections, when he backed Democratic presidential nominee Hillary Clinton.

Early opinion polls showed Steyer, an environmentalist and philanthropist based in San Francisco, trailing other Democrats in name recognition and support.

Steyer’s campaign will focus on reducing corporate influence on politics and addressing climate change. He will kick off his White House bid with events in the early-voting state of South Carolina; the swing state of Ohio; and primary delegate-rich California, according to his campaign.