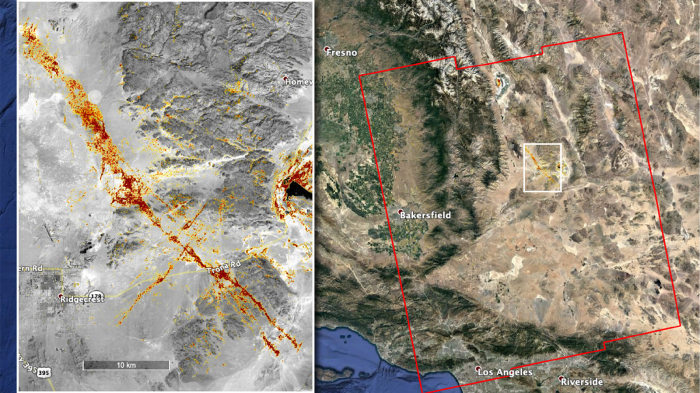 The map covers an area of 250 by 300 km, shown by the large red polygon. Each pixel measures about 30 meters across, according to JPL.

To make the map, the team used synthetic aperture radar (SAR) images from the European Space Agency's Copernicus Sentinel-1 satellites from before and after the sequence of quakes -- July 4 and July 10, respectively.

The map may be less reliable over vegetated areas but can provide useful guidance in identifying damaged areas, said JPL.

A week after the two strong earthquakes struck near the city of Ridgecrest, NASA scientists and engineers continue to analyze satellite data for information on fault slips and ruptures.

Their observations are helping local authorities assess damage, and will also provide useful information to engineers for designing resilient structures that can withstand ruptures, said JPL.

Southern California was shaken by two powerful earthquakes successively last week, one with a magnitude of 6.4 on July 4 and the other 7.1 on July 5, the largest to strike the region in decades.

The two earthquakes caused widespread structural damage to roads, waterlines and gas lines, and raised some concerns about whether other big ones will hit the region again and trigger more damages.