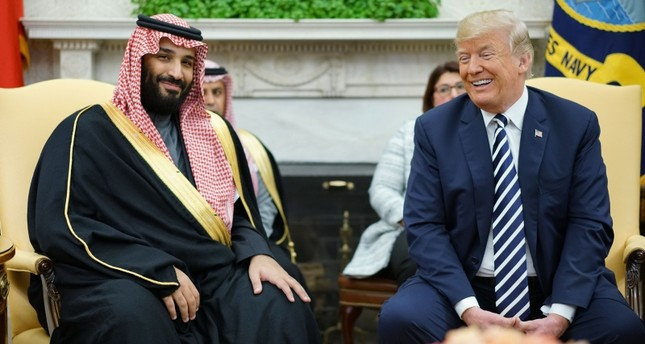 The U.S. Senate has failed in a bid to override a series of vetoes issued by President Donald Trump, allowing the administration to move forward with plans to sell billions of dollars of weapons to Saudi Arabia and the United Arab Emirates.

Trump's decision to sell the weapons in a way that would have bypassed congressional review infuriated lawmakers from both parties. In a bipartisan pushback, Democrats and Republicans banded together to pass resolutions blocking the $8.1 billion weapons sales to the U.S. allies in the Persian Gulf.

A vote Monday to override Trump's vetoes failed, 45-40. A two-thirds vote was needed.

The White House argued that stopping the sales would send a signal that the United States doesn't stand by its partners and allies, particularly at a time when threats from hostile countries such as Iran are increasing.

Tensions between Iran and the West have mounted since Trump unilaterally withdrew the U.S. withdrew from a 2015 accord that restricts the Iranian nuclear program. Trump reimposed sanctions that had been lifted under the accord.

Saudi Arabia has long been a regional rival to Iran, and tension has mounted between the UAE and Tehran over several issues, including the UAE's coordination with U.S. efforts to curb what it calls Iran's malign activities in the region.

The Senate votes came after the House Oversight Committee released a report criticizing the Trump administration over its apparent willingness to let private parties with close ties to the president wield outsized influence over U.S. policy toward Saudi Arabia.

New documents obtained by the committee "raise serious questions about whether the White House is willing to place the potential profits of the president's friends above the national security of the American people and the universal objective of preventing the spread of nuclear weapons," the report said.

The report "exposes how corporate and foreign interests are using their unique access to advocate for the transfer of U.S. nuclear technology to Saudi Arabia," said Rep. Elijah Cummings of Maryland, the panel's Democratic chairman.

Cummings, who has repeatedly targeted the Trump administration in a series of investigations, came under sharp attack from Trump this weekend, when the president called the congressman's district a "disgusting, rat and rodent infested mess" where "no human being would want to live."

A spokesman for Barrack said he has been cooperating with the Oversight panel and provided documents the committee requested.

The spokesman, Owen Blicksilver, said Barrack's investments and business activities are well known and are intended to "better align" Middle East and U.S. objectives. Barrack has never served in the Trump administration.

The Trump administration has approved seven applications for U.S. companies to sell nuclear power technology and assistance to Saudi Arabia. Lawmakers from both parties have expressed concerns that Saudi Arabia could develop nuclear weapons if the U.S. technology is transferred without proper safeguards.

Congress is increasingly uneasy with the close relationship between the Trump administration and Saudi Arabia. Trump has made the kingdom a centerpiece of his foreign policy in the Middle East as he tries to further isolate Iran. In the process, Trump has brushed off criticism over the killing of journalist Jamal Khashoggi and the Saudis' role in the war in Yemen.

The nuclear approvals, known as Part 810 authorizations, allow companies to do preliminary work on nuclear power ahead of any deal to build a nuclear plant. They do not allow transfer of nuclear material, equipment or components.