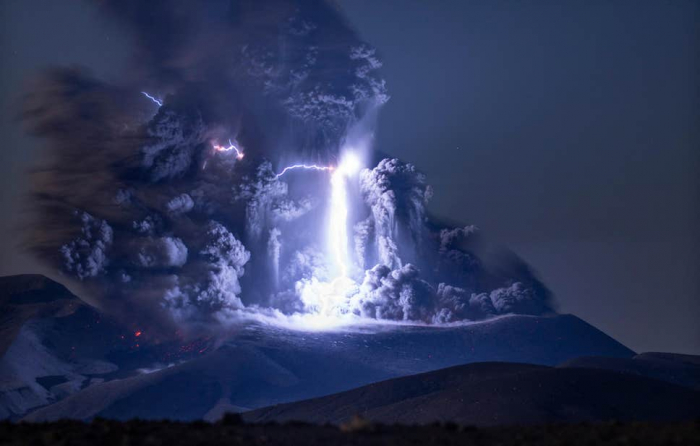 An extraordinary image has captured the moment a lightning bolt hit an erupting volcano.

Photographer Martin Reitze took the photographic as volcanic ash escaped from the Ebeko volcano in Russia while the lightning lit up an accompanying ash cloud.

The 55-year-old from Munich, Germany was standing around a kilometre away from the northern crater of the volcano when it erupted.

"The strong lightning which shows in the image is a very rare exception, as it was much stronger than usual," he said.

"It was strong enough to illuminate the whole sky with its bluish lighting. It caused the moving ash cloud to freeze."

Mr Reitze said he spent around seven hours waiting for an eruption to happen and felt "extremely lucky" that he managed to get the shot.

He said: "I was extraordinarily lucky.

"Even when you are a avid volcano observer it can take a decade to witness such a lightning event.

"It is an unusually strong and rare volcanic lightning bolt generated by the eruption of the volcano.

"It was a scary moment, unexpectedly the whole landscape was bright and when the lightning struck, it irritated my eyes."

Mr Reitze said he previously captured thousands of pictures of volcanic eruptions but "never managed to get one like this."

He said: "It shows that there are many wonders on this planet and how powerful nature really is.

"This image is a result of being patient for over a year. I had to frequently visit volcanoes worldwide in often extremely remote places to finally witness something like this."