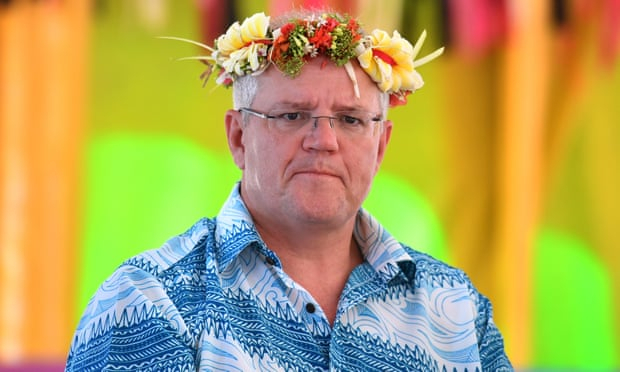 Australia has succeeded in removing all but one reference to coal on the draft communique of the Pacific Islands Forum, and is expected to be able to get that removed on Thursday as Pacific leaders including Scott Morrison meet to debate the text.

Sources familiar with the negotiations on the communique, which is used for regional policy making, told Guardian Australia that Australia has been working hard during negotiations to soften the language on climate change and has succeeded in many mentions.

Tuvalu’s prime minister, Enele Sopoaga, told Guardian Australia at a dawn fishing trip on Thursday in the lead-up to the leaders’ retreat that it looked as though Pacific leaders would not be successful in getting the language of “climate change crisis” in the communique, with the draft most likely to describe the current situation as a “climate change reality”.

A source who saw a draft text of the communique said the version leaders would be debating would call on members to “reflect on” the UN secretary general’s call for no new coal and an end to fossil fuel subsidies, rather than actually endorsing it, which is what Pacific small island leaders have said they want.

Sopoaga said he expected the discussion, which traditionally takes all day, to be wrapped up by lunchtime. Last year the communique, which was issued “with qualifications” from Australia, was delivered at 10.30pm after a full day of negotiations.

Other sources familiar with the negotiations said this was unlikely as much still had to be discussed. As of Tuesday night, one said, much of the text was still bracketed – meaning that leaders needed to work through it.

If Australia succeeds the resolution will differ greatly from what was hoped for by small island Pacific leaders, who released a statement on Tuesday that called for “an immediate global ban on the construction of new coal-fired power plants and coalmines” and for all countries “to rapidly phase out their use of coal in the power sector”.

Pacific leaders have been strident in their calls for urgent action on the climate crisis at the forum in Tuvalu, one of the countries most at risk due to climate change. It is affected by rising temperatures as well as rising sea levels, erosion, tide inundations and salinity in the water table that makes growing food very difficult. Many on the islands believe their country will be submerged within their lifetimes, forcing them to leave.

On Monday, the Fijian prime minister, Frank Bainimarama, called for Australia “to do everything possible to achieve a rapid transition from coal to energy sources that do not contribute to climate change”, saying coal posed an “existential threat” to Pacific islands.