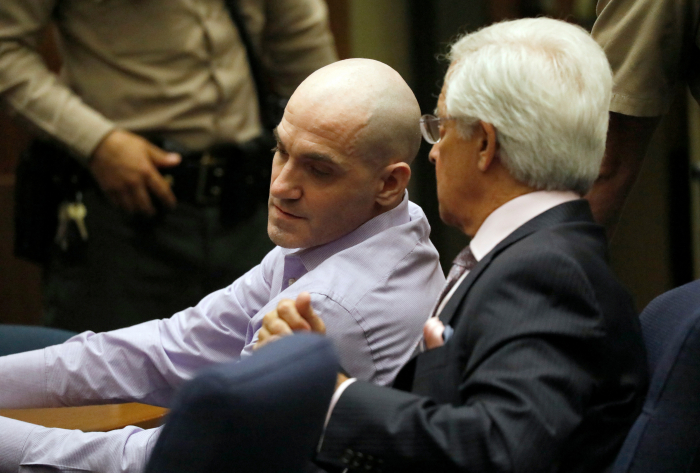 Prosecutors in Los Angeles painted Gargiulo, 43, as a "stone-cold serial killer" who preyed on women in planned attacks.

He was also found guilty of attempting to kill a 26-year-old in 2008, who survived and testified against him.

Actor Ashton Kutcher also testified, having arranged a date with one of the victims on the night she was killed.

In 2001, Mr Kutcher knocked on the door of 22-year old Ashley Ellerin, received no answer, and assumed his date had left for the night because he was late, he told the court in May.

But he recalled looking in the window and seeing what he had thought were red wine stains, he said.

Ms Ellerin was discovered dead the next morning by her room mate, having been stabbed dozens of times.

Image copyrightREUTERSImage captionAshton Kutcher testified about the night Ms Ellerin was killed
Gargiulo lived in the same El Monte building as his second victim, 32-year-old Maria Bruno, in 2005. Ms Bruno was attacked and killed with a knife while she slept.

But in 2008, his third potential victim Michelle Murphy managed to fight him off when she woke up to Gargiulo on top of her, stabbing her with a knife.

Testifying against her attacker, Ms Murphy said after she managed to kick him off the bed, he said "I'm sorry" as he fled.

The brutal nature of the attacks and the fact that they were all carried out with a knife led to the "Hollywood Ripper" description in the media.

Defence lawyers argued there was no evidence in the two murder cases. In the case of Ms Murphy, who survived to testify, they argued he suffered from a dissociative disorder which left him in a "fugue state".

After four days of deliberations, a jury found him guilty of both murders. The death penalty is a possibility during his sentencing at a later date, although California recently issued a moratorium on executions.

The trial will next decide if he was sane at the time of the attack before sentencing.

Gargiulo is also accused of another murder in the state of Illinois many years before - in 1993, when he allegedly attacked 18-year-old Tricia Pacaccio, the older sister of a friend.

He is likely to be extradited to Illinois to face a separate trial in that case, which unearthed new evidence in 2011.