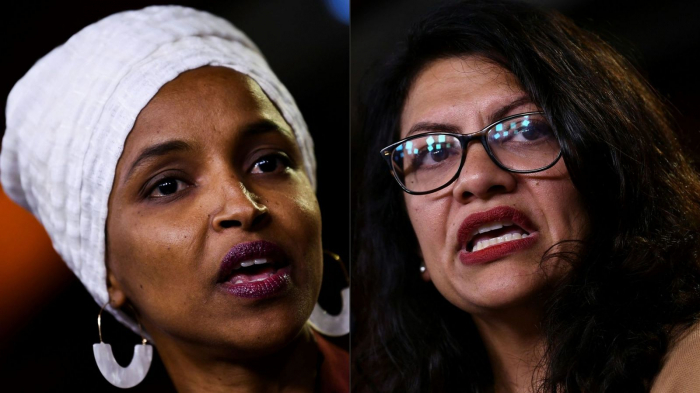 Benjamin Netanyahu says Rashida Tlaib and Ilhan Omar want to "negate the legitimacy of Israel", but faces claims of "weakness".

Israel has banned two US congresswomen from entering the country for supporting an international boycott movement.

Democrats Rashida Tlaib, whose family emigrated to the US from the West Bank, and Ilhan Omar - were barred for "negating the legitimacy of Israel".

US President Donald Trump had put pressure on his ally Benjamin Netanyahu to block the trip, saying it would have shown "great weakness" to allow it to go ahead.

He has previously targeted the two Muslim women in remarks branded racist, telling them to "go back" to the "broken" countries they came from.

Both are US citizens and Ms Tlaib was born in America.

In what appeared to be an unprecedented move, Mr Netanyahu blocked the politicians' trip saying it was "clear" the "sole purpose was strengthening the boycott and negating the legitimacy of Israel".

He added Israel had welcomed 70 members of Congress from both the major parties in the past with "open arms" and there was "not a state in the world" that respects the institution more.


More about: Israel   US