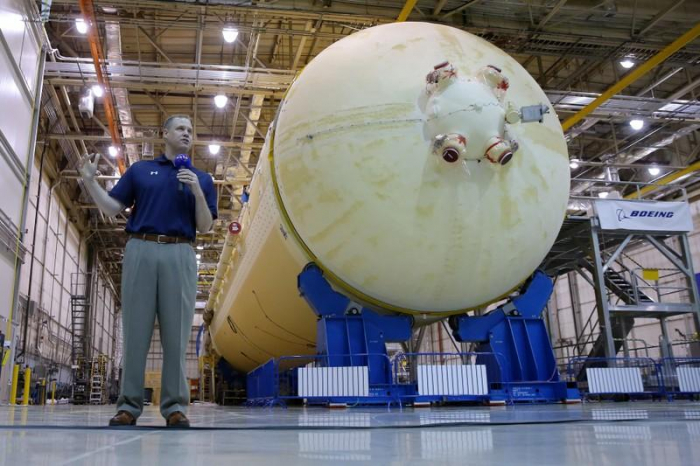 Despite protests from Texas lawmakers, NASA's Marshall Space Flight Center in Huntsville, Alabama, will manage the agency's plans to build a lunar landing system that will carry the next man and the first woman to the surface of the moon in 2024, NASA Administrator Jim Bridenstine announced Friday, according to CBS News.

Appropriately enough, the critical program will be managed by Alabama native Lisa Watson-Morgan, who earned her engineering degree from the University of Alabama and is a three-decade NASA veteran.

"The program that will be managed here in northern Alabama is going to land the first woman on the south pole of the moon, and that landing system is being managed by one of NASA's best engineers," Bridenstine said. "And she just happens to be a woman. What a great American story for NASA."

An artist's impression of a possible lunar lander design, showing an ascent vehicle, carrying an astronaut crew, blasting off from the surface of the moon.

Bridenstine made the announcement standing at the base of a towering test version of the 149-foot-tall liquid hydrogen tank that will be used in the first stage of the huge Space Launch System — SLS — rocket being built by Boeing to carry astronauts back to the moon.

The Artemis moon program is the centerpiece of the Trump administration's push to return astronauts to the surface of the moon by 2024, four years earlier than NASA originally planned. The Johnson Space Center in Houston is managing all aspects of the program as it relates to astronauts, crew training, life support systems and mission design.

The Artemis program calls for building a small space station called Gateway made up of a solar-electric propulsion module connected to a pressurized habitation module and a docking port. The modules will be launched to the moon by commercial rockets and assembled under remote control using autonomous docking systems.

The lunar lander, consisting of three components, also will be launched atop commercial rockets and docked at the Gateway before any astronauts arrive. One component, a sort of carrier craft known as a transfer vehicle, would take the lander from Gateway down to a lower orbit. From there, the lander's descent module will make a rocket-powered landing on the moon, initially carrying two astronauts.

The astronauts would ride down to the surface in the pressurized cabin of an upper ascent stage. That stage will use the descent module as a launching pad, much like the Apollo astronauts did 50 years ago, to climb back up to the transfer vehicle and then on to Gateway.