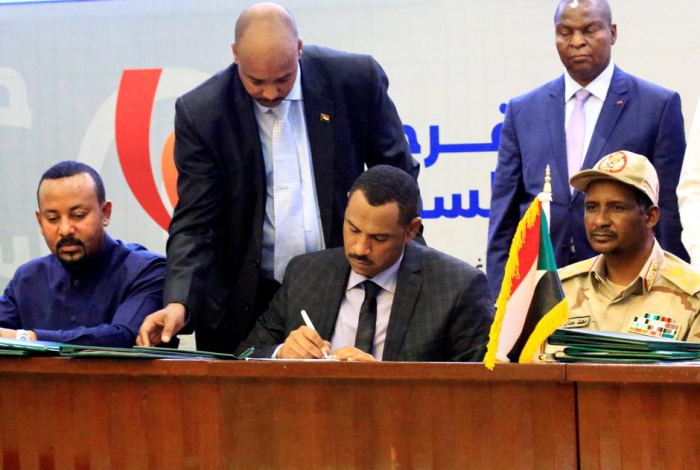 The agreement ushers in a new governing council, including both civilians and generals, to pave the way towards elections and civilian rule.

Mohamed Hamdan "Hemeti" Dagolo, widely regarded as Sudan's most powerful man, has pledged to abide by its terms.

Sudan has seen pro-democracy protests and repression since long-time ruler Omar al-Bashir was ousted in April.

The deal was signed by Hemeti and Lt-Gen Abdel Fattah Abdelrahman Burhan for the military council, and Ahmed al-Rabie for the Alliance for Freedom and Change umbrella group of pro-democracy protesters.

The prime ministers of Ethiopia and Egypt and the South Sudanese president were among regional leaders attending ceremony.

There were scenes of wild celebrations on the streets of the capital, Khartoum, after the ceremony.

Thousands of cheering people gathered around the convention hall where the documents were signed, waving Sudanese flags and flashing peace signs.

Khartoum residents and people from other parts of the country came in on buses and trains for the occasion.

Under the deal, a sovereign council, consisting of six civilians and five generals, will run the country until elections.

The two sides have agreed to rotate the chairmanship of the council for just over three years. A prime minister nominated by civilians is due to be appointed next week.