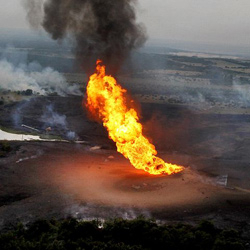 The two valves, installed to steal crude, were placed by unknown persons in the municipality of Barbacoas in southwestern Narino province, near the border with Ecuador, the company said in a statement.

The bombing, which dented the pipeline’s tubing, occurred overnight in Ricaurte, also in Narino province, the statement added.

Though the pipeline was not functioning at the time, the valves caused spillage of oil into a nearby creek, which has now been controlled.

More then 560 illegal valves have been found along the pipeline during the course of the year and the 306 kilometer (190 mile) Transandino have been attacked in Narino 16 times in 2019, Ecopetrol said.

The company did not name the group responsible for the bombing, but the leftist National Liberation Army (ELN) rebels, considered a terrorist organization by the United States and the European Union, regularly attack oil infrastructure.