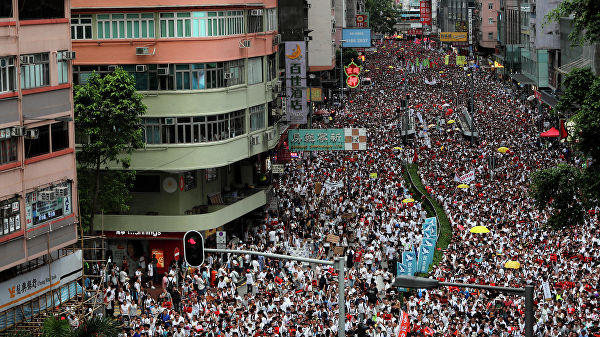 Tens of thousands of protesters poured into one of Hong Kong’s busiest shopping districts on Sunday, braving a downpour to join an anti-government rally in the eleventh week of what have been often violent demonstrations in the Asian financial hub, AzVision.az reports citing Reuters.

Sunday’s heavy turnout indicated that the movement still has broad-based support despite the ugly scenes witnessed during the past week when protesters occupied the city’s airport, for which some activists apologized.

“It’s bloody hot and it’s raining. It’s a torture just to turn up, frankly. But we have to be here because we have no other choice,” said a 24-year-old student named Jonathan who was at the rally in Victoria Park in the Causeway Bay district of Hong Kong island.

“We have to continue until the government finally shows us the respect that we deserve,” he said.

Anger over a now-suspended bill that would allow criminal suspects in Hong Kong to be extradited to mainland China erupted in June, but the rising unrest has been fueled by broader worries about the erosion of freedoms guaranteed under the “one country, two systems” formula put in place after Hong Kong’s return from British to Chinese rule in 1997.

Gathered in Victoria Park at the start of the rally, protesters held aloft placards with slogans including “Free Hong Kong!” and “Democracy now!”, and umbrellas to shield them from the rain. The crowd was peaceful and included the elderly, the middle aged, young people and families, with some parents carrying toddlers.

Despite rally organizers not having permission to march, the park could not accommodate the crowd and many headed west toward the city’s financial center, chanting for the city’s Beijing-backed leader, Carrie Lam, to step down.

The crowd at the Central subway station, one of the city’s busiest, was at a near-standstill on Sunday afternoon as a sea of people dressed in black T-shirts waited to board trains. The group erupted in cheers and chanted “Revolution of our time!” in Cantonese when an empty train finally arrived.