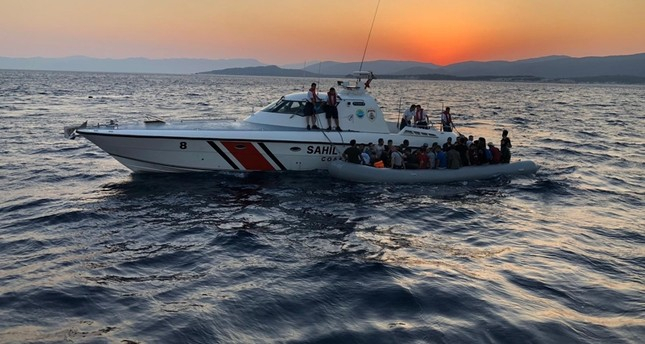 Turkish authorities have intercepted a total of 330 migrants attempting to cross to the Greek island of Lesbos, officials said on Sunday.

The coastguard in the Küçükkuyu area of the western Çanakkale province said it had conducted seven operations to pick up migrants trying to make the crossing since Saturday evening.

The migrants seized were Afghan, Syrian, Iranian and Iraqi nationals, it said, adding that the number attempting to cross to Lesbos had surged recently and that 699 people had been seized since Aug. 10.

Mediterranean arrivals into the European Union, including migrants making the longer and more perilous crossing from North Africa to Italy, totaled 172,301 in 2017, down from 362,753 in 2016 and over a million in 2015, according to U.N. data.

Turkey's seas, particularly the Aegean in the west, have seen a large influx recently with more migrants boarding dinghies to reach Europe. They travel in overcrowded and unsafe boats to reach the Greek islands scattered across the Aegean region and only a few kilometers away from Turkish shores. Deaths are common in these crossings as many migrants, despite paying thousands of dollars to smugglers, are forced to travel in rubber boats crowded far beyond their capacity.

In March 2016, the EU and Turkey reached an agreement to stop irregular migration through the Aegean Sea and improve the conditions of the more than 3.5 million Syrian refugees in Turkey. An exchange program to return migrants that previously entered Europe to Turkey and settle Syrian refugees in EU countries failed to curb the migrant flow, as the high number of illegal migrants intercepted by Turkey indicates.