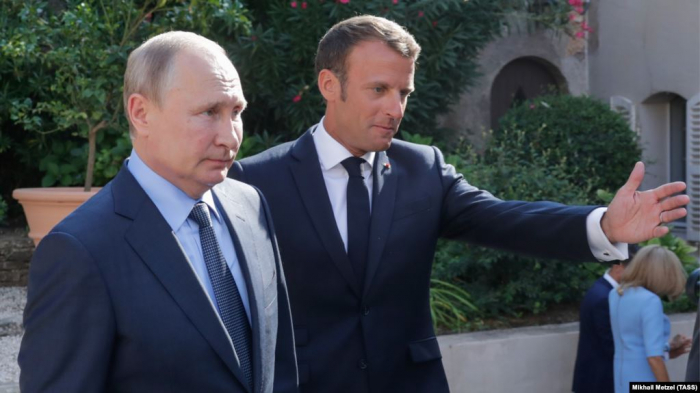 During their meeting in southern France, Russian President Vladimir Putin and his French counterpart, Emmanuel Macron, discussed efforts to advance negotiations to curb the conflict between Ukrainian forces and Moscow-backed separatists in eastern Ukraine.

Macron, who held talks with Putin at the Palace of Versailles near Paris in 2017, this time hosted him at his summer retreat at Bregancon Fort, near the village of Bormes-les-Mimosas.

The talks lasted 2 1/2 hours and touched upon the Syrian conflict, the situation in Libya, the Iran nuclear deal, and "prospects" for a four-way summit on the crisis in Ukraine, according to Russian news agencies.

Ahead of the meeting, Macron told a joint press conference that he hoped his talks with Putin will lead to such a summit over the coming weeks, insisting that there was a "real opportunity" for peace.

Fierce fighting was reported in the Syrian town Khan Sheikhun on August 19 where army troops and their allies advanced on a key insurgent-held city, according to the Syrian Observatory for Human Rights, a British-based war monitoring group.

Rebels have held the town since 2014, but are threatened with encirclement in their only patch of territory in nearby Hama Province.

The Russian president voiced support for the Normandy format for negotiations aimed at putting an end to the Ukrainian conflict and involving France, Germany, Ukraine, and Russia.

But he said that phone conversations with Ukrainian President Volodymyr Zelenskiy had given him "cautious" grounds for optimism.

Macron said he will also discuss with Putin ways to deescalate tensions surrounding Iran's nuclear program, the Syria conflict, and arms-control issues. The French president called for the respect of free speech and fair elections in Russia.

The meeting comes after Zelenskiy earlier this month urged Putin to help halt the conflict in eastern Ukraine, where fighting between government forces and Russian-backed separatists has killed more than 13,000 people since April 2014.

Insisting that peace can be returned to Ukraine only by way of diplomacy, Zelenskiy has also called for a new round of talks within the Normandy format for negotiations aimed at putting an end to the war. The format involves France, Germany, Ukraine, and Russia.

"President Zelenskiy has made offers to which -- it seems to us -- President Putin should respond in an encouraging way," AFP news agency quoted a French official as saying on condition of anonymity.

Zelenskiy's election in April "gives us some room to maneuver," the official added.

Kremlin foreign-policy aide Yury Ushakov said that the dialogue between Moscow and Paris had "intensified" in recent months and that Putin's visit to France was the "logical continuation" of his contacts with Macron.

Macron announced in June he planned to host Putin "in order to explore all the forms of cooperation on key topics of destabilization or conflict, without naivety but without closing the door."

Cease-fire road maps announced as part of the Minsk accords -- in September 2014 and February 2015 pacts -- have contributed to a decrease in fighting in eastern Ukraine but have failed to hold.

Putin's visit to southern France comes days before Macron and other world leaders are set to gather in the southwestern city of Biarritz on August 24-26 for a Group of Seven (G7) summit.

France holds the presidency of the G7 this year. The grouping also includes Britain, Canada, Germany, Italy, Japan, and the United States.

Russia was part of what was called the G8, but it was thrown out following its seizure of Crimea.

At Bregancon Fort, Putin said that Russia "would not refuse" working within the previous G8 format, adding, "Any contacts with our partners, in any format, are useful."

But Macron insisted that Russia's return to the G8 and "fully normalized relations" with the European Union, which has imposed sanctions on Russia for its actions in Ukraine, "requires a solution to the Ukraine question."

On Syria, the French president expressed "profound worry" about the bombing of Idlib Province, where air strikes and shelling by the government and its Russian ally have killed hundreds of people since April, including many civilians.

Macron called for the implementation of a de-escalation agreement reached last year between Russia, Iran, and Turkey.

However, Putin insisted that Moscow backed "the efforts of the Syrian Army" to end the "terrorist" threat in Idlib, which is mainly controlled by Hayat Tahrir al-Sham, Syria's former Al-Qaeda affiliate.

Russia and Iran have given Syrian President Bashar al-Assad crucial military backing throughout the war that began with a government crackdown on protesters in March 2011. Turkey supports different rebel groups.