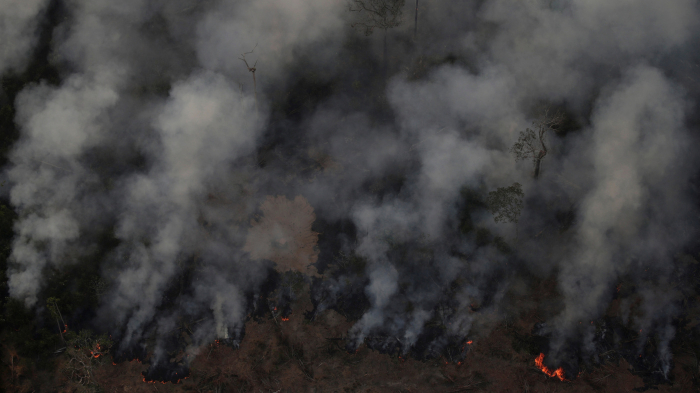 France and Ireland say they will not ratify a huge trade deal with South American nations unless Brazil does more to fight fires in the Amazon.

French leader Emmanuel Macron said President Jair Bolsonaro had lied to him about his stance on climate change.

There are currently a record number of fires in the Amazon rainforest - a major source of oxygen for the world.

Environmental groups say the fires are linked to Mr Bolsonaro's policies, which he denies.

European leaders have also expressed dismay over the fires. UK Prime Minister Boris Johnson called the fires "not only heartbreaking" but "an international crisis".

"We stand ready to provide whatever help we can to bring them under control and help protect one of Earth's greatest wonders," he added.

German Chancellor Angela Merkel has called the fire an "acute emergency... shocking and threatening not only for Brazil and the other affected countries, but also for the whole world".

Mr Bolsonaro said on Friday that he was considering options for fighting the fires, including deploying the military.

However, he has also accused Mr Macron of meddling for "political gain", and previously said calls to discuss the fires at this weekend's G7 summit in Biarritz, France - which Brazil is not participating in - showed "a misplaced colonialist mindset".

How significant is the trade deal?

Very - the EU-Mercosur trade deal has been described as the EU's biggest deal to date.

It took 20 years of negotiations to strike the agreement with the South American bloc, consisting of Argentina, Brazil, Uruguay and Paraguay.

The EU is Mercosur's second biggest partner in trade in goods, accounting for 20.1% of the total in 2018.

By contrast, EU exports to Mercosur accounted for 2.3% of the EU's total exports in 2018.